It’s actually called that. This is the case of a wedding photographer who was sued by the groom, who was a bad lawyer, and it was informative to me in a couple of ways. I did not know that the occupation of wedding photographer was so hazardous — apparently, some people are really demanding and finicky about the little details around their wedding (sometimes, it seems, more so than they are about the marriage), and they’ll go after the photographer if the pictures are not sufficiently flattering. I wouldn’t know about that; at our wedding, we had some people with polaroid cameras wandering around informally. The pictures aren’t so great, but the marriage has been wonderful.

The threatening letter from the lawyer has to be seen to be believed. Here are some excerpts: 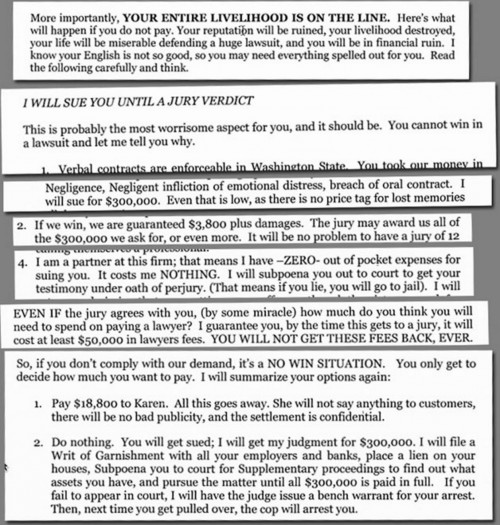 I’ve received a few blustering extortion letters from attack-dog lawyers, but never anything as unprofessional and openly vicious as this thing — they usually try to keep the threats veiled and only vaguely unsettling. This jackhole just freely cranked it up to 11, to attempt to intimidate the photographer into settling.

But go read the whole thing. It has a happy ending with the lawyer having to go before the bar and defend himself. Some days, the bad guys lose.

Kill the TSA » « Just another murder in Bangladesh