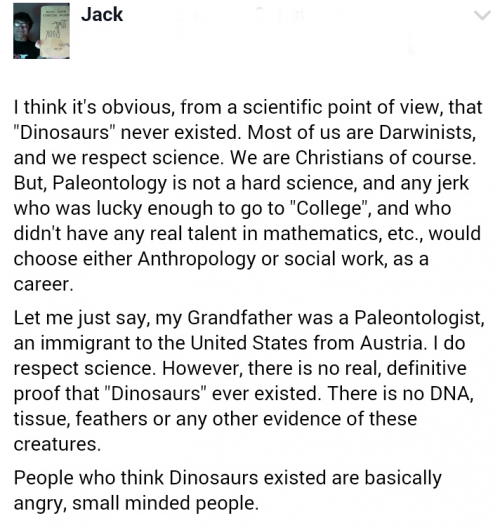 Paleontology is what is classified as a hard science. I’m not a fan of the distinction being made, though: sociology also involves some demanding statistical work, so even if the basis of the stereotype is a lack of math, it’s wrong. Also, anthropologists don’t study dinosaurs.

I’m also amused by the claim that no tissue from dinosaurs has been found. Guess what? Bone is a tissue!

Before you indignantly explain that this has to be a spoof, that creationists believe dinosaurs were on the Ark, I have to tell you: Ken Ham is not mainstream. Answers in Genesis argues that dinosaurs existed (because the Bible says so, although it doesn’t), but there are a lot of creationists who reject all the fossil evidence, rather than trying to mangle and distort it. There are conspiracy theorists who think dinosaurs were an invention, and that the evidence is all made up.

Some of these dino-deniers are hilarious. “Mike”, for instance, is truly oblivious.

Think about it. I live in New Jersey. One of the shittiest states in the Union besides Pennsylvania, Delaware, and Connecticut. Why is it that there are no dinosaur fossils anywhere near the United States? If this whole Pangaea nonsense is in fact true and the entire world was connected together at one point, wouldn’t the fossils be spread around evenly? So they typically only find fossils in Canyon-like areas in the Middle East or Africa or Australia. But never in North America? Hmm. That seems a bit off to me. Needless to say, archaelogists have also never found an entire dinosaurs’ remains. And don’t you dare say because it’s 34,000,000 million years old. It’s because they never existed.

Hmm. New Jersey, you say? It’s too bad nobody ever mapped the distribution of dinosaur fossils. 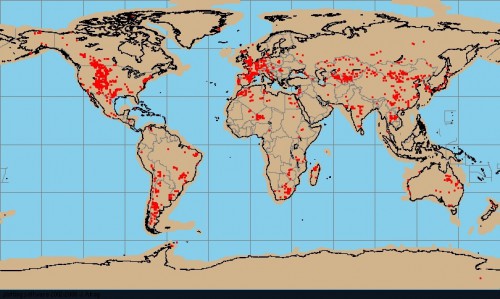