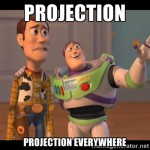 Isn’t it weird? There are all these clueless people telling people like me what we’re thinking, and getting it so wrong. Just this morning, Ken Ham announced…

That must be why atheists encourage people to read the Bible. It must be why I and 300 atheists visited the Creation “Museum” several years ago. We’re not afraid of Christianity, we think it’s foolish: there’s a difference, you know. I’m planning to visit the Giant Fake Ark myself once it’s opened to the public, because I think informed criticism is the most powerful kind of criticism there is.

As for this nonsense about not wanting to hear the Christian worldview…we’re soaking in it right now. It’s everywhere. Christians distribute Bibles at my college, they come up and knock on my door to tell me about Jesus (well, once…then they stop coming around. Those poor Jehovah’s Witnesses looked terrified when I told them who I was.) There’s no fear involved. It’s more of a disgusted resignation, and a determination to correct the bullshit when it flows.

And then Dave Futrelle finds a completely different example of weird-ass projection! There’s this word that gets thrown around a lot by people of a certain mindset. It’s been flung at me many times. Recently it’s become the go-to insult of choice for the alt-right set.

That word is “cuck”.

It’s a very strange word, because every time people have used it against me, they act as if it’s some great triumph, as if they have somehow found the label that perfectly describes my mind-set. In reality, it leaves me baffled. “Why are you using the in-group buzzword that places you firmly in the category of racist asshat,” I think. It’s like when I see a guy with a man-bun, and think “hipster” (except, of course, that’s not as pejorative). “Cuck” is the man-bun of the alt-right racist/sexist set.

What Futrelle found, though, is one of them explaining what he thinks it means.

“Cuck” works for the same reason that “racist” works: it is an irrational word that cannot be deconstructed with reasoning. Just as “racist” hits rightists hard because it attempts to psychopathologize the healthy preference for our own race, “cuck” is devastating to leftists because they are being described as the most humiliating kind of man possible, one who gets aroused by letting another man—or other men—have sex with his wife.

I guess I missed the part where I was devastated by the insult. Unless “devastation” is a synonym for “bemusement”? Perhaps he could follow up the devastation with a shattering “You have black friends”, and then utterly destroy me with a “You respect women’s autonomy”. “You also don’t torture small animals” — Boom! Mic drop! They’ll be mopping me off the walls!

Between these loons and Ken Ham, there are a lot of people out there with deeply twisted world-views.