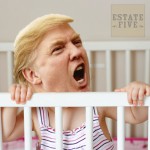 Is everyone mad? Do you not see the obvious concerns?

I’m a scientist! I can put two and two together and get the obvious answer: Baby Donald Trump is in great peril if grown-up Donald Trump should get the nomination and be elected president. After a few years of a Trump presidency, swarms of physicists (who are mostly Democrat, I should note) will be rushing to develop a time machine with the specific purpose of killing a baby.

That’s why we need to develop a time machine immediately, to protect innocent Baby Trump. I expect pro-life groups all across America to immediately drop whatever else they are doing, and instead funnel all of their money into physics research. Not only will it protect one baby, not only will it defend trillions of past potential future human lives, but I suspect that most of them are Trump voters who want him to be president, anyway.

I anticipate a few concerns about this program.

Why do we need a crash program? It’s a freakin’ time machine. Because, obviously, if the baby-killers get it first, they will erase Donald Trump and all memories of Trump. Our researchers would be working away at our time machine, and then suddenly they’d be wondering why they’re doing this — they’d know nothing of the horrors of Trump, and would be baffled at why they’re developing a machine to kill Baby President Kardashian. We must be first.

What are your specific plans on how to use your time machine? Clearly, we must invest in a long-term defense: defending only Baby Trump could be defeated by murdering Toddler Trump, or Obnoxious Adolescent Trump, or Spoiled Twenty Year Old Asshole Trump. What we’re going to have to do is send back a robot to protect Trump from pre-birth to presidential candidacy. This has the advantage that sending back an emotionless cybernetic automaton to guide him through his youth might also enhance his empathy.

Wait. Why do you want to protect Donald Trump? Well, I don’t actually. I think he’s a nasty polyp on the colon of the body politic, and nipping him in the bud might be a good idea. But I’m also an SJW, and you know how we defend the right of the most odious people to exist, and he’s pretty dang odious.

But really, I just want a time machine. Once we send the robot back to the mid-1940s, I’m setting the dial to the Cambrian and going on an ancient metazoan collecting trip. (Where I will meet an army of robots tasked with defending primeval chordates? Only time will tell.)