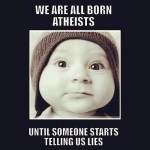 Ben Seewald, whose only claim to fame is that he’s married to Jessa Duggar, tries to stake out his own domain of stupid in a conversation with Dante Berry, another evangelist. He does not do well. But in the topsy-turvy world of American fanatical Christianity, that might mean he succeeded.

“That’s right,” Ben agrees, “there’s no room for racism in Christianity. That all comes from the Devil. That all comes from, like, this false religion out here, evolution, that stuff? Teaching that, like, some people are ‘more evolved?,’ and different stuff.”

Do I really need to spell this out? Evolution is less than 200 years old. Racism preceded it. Evolution cannot be the original cause of racism.

Furthermore, Christianity is suffused with racism. Slavery and pogroms were justified by Bible verses long before evolution came along; those Founding Fathers the fanatics want to claim as fellow Christians? Racist slave owners. The Civil War? Backed up by pious, devout claims that the Bible said it was OK.

Evolution does not teach that some people are “more evolved”. To the contrary, all human races are equidistant from the last common ancestor of chimps and humans. To say that one group is more evolved from another is absurd. Meanwhile, the Bible teaches (and Ken Ham still promotes at Answers in Genesis) the Hamite theory of racial origins — that black people received their skin color as a curse from Noah, and that it condemns them to an eternity of servility.

How about if we just show this one video in all sex ed classes? » « Now that he’s out, what’s Kent Hovind up to?