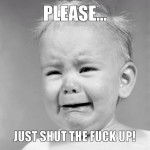 I am not a fan of Brendan O’Neill. I think he’s a libertarian ass and under all the pretense, an old-fashioned conservative. He has, of course, decided that Tim Hunt is being persecuted.

New rule #1: when you’re going to accuse a group of being in a “frenzy”, explain what you mean and give evidence.

Because I don’t see it. I’ve been seeing academics write about it and deplore Hunt’s words; I’ve seen them suggest that this behavior ought to be publicly repudiated by major organizations. That sounds about right to me. That’s what ought to be done: academics and journalists ought to express their opinions honestly, and have an expectation of some accountability.

New rule #2: when you start accusing a group of being in a “witch hunt” or comparing them to the Inquisition, you have to be specific in saying exactly what they ought to do differently.

Yes, O’Neill compares the response on Twitter to the Inquisition.

The response to Hunt is way more archaic than what Hunt said. Sure, his views might be a bit pre-women’s lib, pre-1960s. But the tormenting and sacking of people for what they think and say is pre-modern. It’s positively Inquisitorial.

The irony is too much to handle: Hunt is railed against for expressing an old-fashioned view, yet the railers against him do something infinitely more old-fashioned: they expel from public life someone they judge to have committed heresy. Kick him out. Strip him of his titles. Mock his misfortune. “Savour the moment.” How awfully ironic that the Royal Society, which played a key role in propelling Britain from medievalism to modernity, is now being asked to behave in a medieval fashion and send into the academic wilderness a heretic among its number.

Excuse me, but how has he been expelled from public life? Is he in solitary confinement in a cage somewhere? Is his ability to interact in public in any way diminished compared to, say, me, or Brendan O’Neill, or yours? Is he wandering in a wilderness, or is he crying in his comfortable home with the expensive paintings on the wall and a lovely gold medal from the Nobel Foundation?

Here’s what’s illiberal: that someone said something repugnant and stupid in public, and Brendan O’Neill does not think the public should be allowed to judge that person. We are supposed to give a certain privileged subset of humanity carte blanche and never criticize them. Deciding that a public figure has uncivilized, ignorant views…why, that’s not to be allowed! And to speak out and actually say that those views are vile…why, that it is the true vileness!

So O’Neill does have a suggestion for how we all should respond to people like Hunt. We should all shut up.

The Hunt incident is quite terrifying. For what we have here is a university, under pressure from an intolerant mob, judging a professor’s fitness for office by his personal thoughts, his idea of humour. Profs should be judged by one thing alone: their depth of knowledge. It shouldn’t matter one iota if they are sexist, stupid, unfunny, religious, uncouth, ugly, or whatever. All that should matter is whether they have the brainpower to do the job at hand.

Oh, gosh. I had no idea. Professors are exempt from all the normal rules of human behavior! Perhaps science isn’t really part of the domain of human experience after all. We get to be judged on one narrow criterion, and everything else is excluded. At long last, I can kick puppies! I can spit on poor people in the street! I can go play in a national forest with a chainsaw!

Oddly, though, the administrators and faculty at my university don’t think that way. It’s not as if every year I go in and take a test on developmental and cellular biology, and my “depth of knowledge” determines my employment status.

I am regularly evaluated on the academic holy trinity: research, teaching, and service. Did you know that public outreach, administration, collegiality, and communication are actually regarded as significant components of the professor’s job? O’Neill clearly doesn’t.

So his answer is flatly wrong and unrealistic. Professors aren’t excused from being more than grant-writing lab-running machines.

So what would O’Neill’s actual solution to this “illiberal frenzy” be? Are my posts on the Tim Hunt affair to be deleted? Should anyone on Twitter who was appalled at his behavior have their accounts banned? Perhaps we’re just prohibited from saying anything about Hunt’s offensive remarks — we should all change the subject to something about cyclin-dependent kinases.

Once again, conservative histrionics are exposed for what they are: a massive case of projection. The whine about illiberal academia is really a complaint that we can disagree strongly.

Is there any reason to argue about torture anymore? » « Mary’s Monday Metazoan: A member of the family