I get asked that question so often. My usual answer is, “I don’t know, probably.” (It’s also a good answer if they ask, “does this prevent cancer?”) That’s safe to say, because just about anything can be found associated with cancer, if you look hard enough. I’ve read enough papers to know that if you can find a study accusing a food to be of the devil, you can find another one saying it’s angelic. And there will probably be some feckless mass media organ screaming CAUSE or CURE.

So this analysis of putative cancer agents is really useful. You can see that the studies are all over the map. 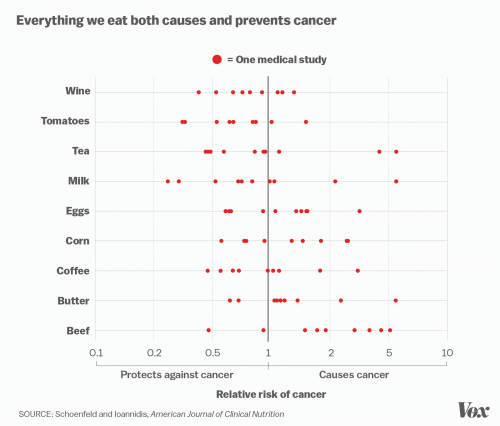 Did you know that broccoli contains entirely natural and known carcinogenic pesticides? And that it also contains glucosinolates and isothiocyanates, which are supposed to be good for you and prevent cancer? But wait — at high concentrations, glucosinolates are known to cause cancer in rats! And you know that most plants don’t want to be eaten by animals, so they’ve evolved chemical defenses. Why should they be good for you, you plant-killer, and how can chemicals be simultaneously good and bad?

You simply can’t judge the effect of a compound from a single study. You must understand the background to the work, the context in which it is implied, and other related studies that might tell you something about the mechanism of its operation. That chart above is also a little misleading: all clinical trials are not equal. What is the sample size, what population is involved, what protocols were used?

Just keep that in mind next time you see an article in the popular press touting a food as the simple cause or cure of a disease…and next week another article claiming the opposite, that’s not a problem with the science. It’s a problem with the press. That range of results is an indication of the complexity of the problem.

(But not to let all of science off the hook: there’s also a fair amount of bias out there. You can find old studies praising the health benefits of cigarettes, or new ones claiming that global climate change is nearly nonexistent, which is a consequence of the taint of big money.)