In case you missed last night’s state of the union address, here it is (and here are a few departures from the script). It was…OK. It was largely focused on the economy (which is slowly getting better) and increasing opportunity for those who aren’t doing as well — so that was good. I’m not entirely convinced that Obama isn’t still in the pocket of Wall Street, but he talks a good game.

There was a little bit about climate change, and he made a sharp dig at the Republicans.

I’ve heard some folks try to dodge the evidence by saying they’re not scientists; that we don’t have enough information to act. Well, I’m not a scientist, either. But you know what — I know a lot of really good scientists at NASA, and NOAA, and at our major universities. The best scientists in the world are all telling us that our activities are changing the climate, and if we do not act forcefully, we’ll continue to see rising oceans, longer, hotter heat waves, dangerous droughts and floods, and massive disruptions that can trigger greater migration, conflict, and hunger around the globe. The Pentagon says that climate change poses immediate risks to our national security. We should act like it.

There was some I was less impressed with.

As Americans, we respect human dignity, even when we’re threatened, which is why I’ve prohibited torture, and worked to make sure our use of new technology like drones is properly constrained.

Oh, yeah? I know it’s a political speech full of platitudes, but I’d like to see the evidence that Americans as Americans have a particular respect for human dignity. From Abu Ghraib to Ferguson, the facts seem to state otherwise. To say that you’ve prohibited torture is a mighty low standard to set, and claiming that you’ve “constrained” technology that is used to blow people up isn’t saying much.

The Republicans brought on their Great White Hope, Joni “Pig Testicles” Ernst of Iowa, to state their rebuttal. Clearly they’re hoping to groom an exciting new challenger, but she was terrible, droning on and on about how poor she was growing up, but now she’s seen the benefits of selling out to the rich — oh, wait, no, she didn’t say the last part. Maybe it plays well with Republican farmers, but I just saw Sarah Palin on sedatives. She did succeed at one thing: her new nickname will be Joni “Bread Bags” Ernst. 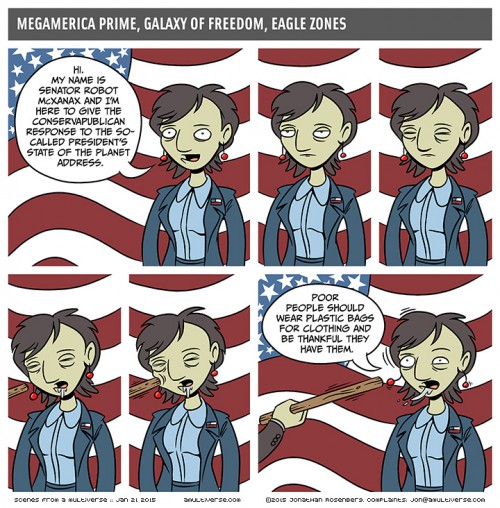 I guess the Tea Party and Rand Paul and Ted Cruz also had rebuttals, but damn, I just couldn’t care less.