Joe Sacco has drawn a genuinely excellent, thoughtful cartoon about the Charlie Hebdo attacks. It made me stop and think, so I think it was a very effective use of the medium, and I recommend you all go look at it now.

But it has one problem: it did make me think, and think about the attacks, and the outrage of the people who committed them, and the cartoonist who was commenting on them. And I didn’t find myself entirely in agreement with Sacco.

Here’s the third panel of the cartoon. 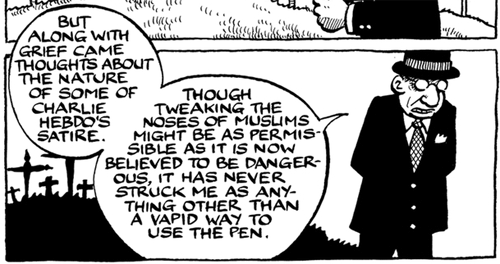 Sacco says, “Though tweaking the noses of Muslims might be as permissible as it is now believed to be dangerous, it has never struck me as anything other than a vapid way to use the pen.” That’s a judgment of Charlie Hebdo’s output.

Here’s the thing: I don’t know anything about Charlie Hebdo other than the scattering of cover images I’ve seen. I’ve never read it; I can’t read it. It’s in French. I know scarcely any French, other than “oui” and “non” and a scattering of nouns that mostly have to do with food. As far as I know, the magazine could be total crap and Sacco was being incredibly generous to suggest it was merely vapid, or it could have been the great shining beacon of modern revolutionary French literature. I wouldn’t know. I don’t care. The quality of their work shouldn’t be a consideration, nor is the identity of their preferred targets: it wouldn’t make it right to blow up the offices of the local chapter of the Ku Klux Klan for publishing racist tripe, and it doesn’t make it right to murder a dozen people for drawing “vapid” cartoons. That’s our only consideration here.

Even if the satire was of the abominable quality of the Morris Northstar, just a label slapped on flagrant racism as a fig leaf (and again, I have no idea of the quality of Charlie Hebdo), it doesn’t warrant sending a hit squad to their offices. If the satire were as biting and sharp as a Twain or a Mencken…well, you might feel totally inadequate to respond in kind, but it also doesn’t justify executing them.

If the concern was that this was bad comedy that was punching down on an oppressed group, I would have some sympathy for the principle, but I’d still say that nothing in this argument excuses murder. If it did, I can think of several comedians who would be riddled with bullets every time they opened their mouth.

It’s also complicated. Muslims in France can be an ethnic minority, in which case you are definitely punching down if you pick on their status as immigrants who are discriminated against. But at the same time, being religious puts you in the majority and gives you cultural clout that unbelievers lack (when Bill Donohue sides with Muslim terrorists, you know the religious are finding common cause), and yes, you should feel free to mock bad ideas, like Islam…or Catholicism, even if other aspects of the target make them unfairly vulnerable.

Religions and religious figures are mocked and lampooned for a variety of reasons. Perhaps it’s sometimes done for no other reason than to upset the religious. Let me be clear that I don’t approve of that (though I do defend the right of others to do it).

However, more often than not, the lampooning is done with intention of shattering, if only for a moment, the protective façade of reverence and deference that has been erected around some iconic figure or belief, so that we can all catch a glimpse of how things really are. At such times, lampooning can become great art.

Again, I don’t know if Charlie Hebdo was “great art” or petty sniping at the oppressed. The difference is rendered irrelevant by the actions of their killers. This is a case in which I am uninterested in defending the quality of the satire, because I can’t and because I shouldn’t have to — yet people keep trying to bring it up as an issue.

It’s a shame, too, because it weakens the real questions in Sacco’s comic.

Here are the eightth and ninth panels of the cartoon. 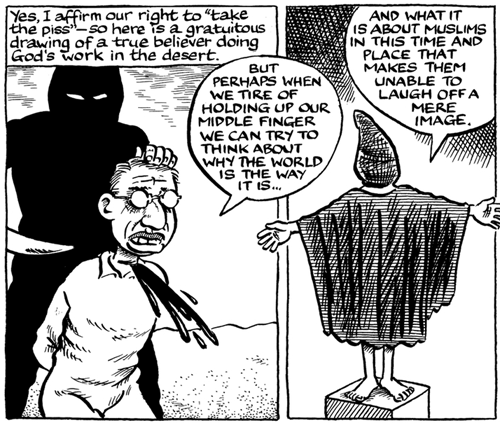 Are Muslims the subject of injustice, do they have a legitimate reason to be angry? Yes they are, yes they do. They shouldn’t even be expected to merely laugh off the horrors of Abu Ghraib, or even the routine discrimination against brown-skinned people at border checkpoints. It is understandable that they can’t simply laugh away bad jokes that contribute to a climate of fear, or policies that do deep harm to them. But let’s not forget that the world also has images of real people having their heads chopped off, or the bloody floor at the Charlie Hebdo offices, and we could argue that everyone is justified in being angry at everyone else for some reason, therefore answering with hot lead is a rational reaction. A minority in the Islamic world is doing a masterful job of providing provocative commentary, even more powerful than anything a few French satirists ever did, so perhaps we should argue that drone strikes and military invasions are reasonable responses?

I don’t think so.

There are appropriate ways to react, and I think a majority of Muslims are capable of recognizing that terror isn’t the answer, on either side. It’s not as if Muslims have no recourse other than murder, or don’t oppose what happened in France.

“This murder is the most precious gift that terror has given racism in France,” Moroccan columnist Hamid Zid wrote Thursday. “Those murders killed not only the journalists, but the millions of Muslims who live in France, and have also justified Islam’s murderous image. They have plunged a knife into the heart of Islam and Muslims worldwide.”

Liberal, secular and religious Muslims again find themselves on the defense, as though they were responsible for creating an environment inducive to terror. Their voices usually go unheard. They do not appear on talk shows, and television series on Islam are not interested in them. They represent that which is self-evident and allow their homelands, in Europe or the Middle East, to boast of multiculturalism.

Not only “Western civilization” is mobilizing against Islamic terror organizations. The “Islamic civilization” is doing the same, viewing extreme terrorism as a danger to its culture and its reputation.

We must ferociously speak out against terrorism, without qualifications, and without respect for authority — whether it’s committed by the relatively powerless, or those with obscene amounts of power. When we start qualifying our approval of criticism based on its artistic quality, we play right into the hands of those with the money and resources to commission the very best propaganda. I don’t think the appropriate response to Sacco’s comic is to consider backing off on criticising Islam, or the bloody actions of fundamentalist Islamists…it ought to be to step up our rebuke of militarists who think bombs are the answer to our problems.

Because right now Dick Cheney is probably squatting in a vat of virgins’ blood in a secure location, sipping on a cocktail made with the tears of innocents, and chortling at the fact that his enemies are butchering effete French literateurs and refocusing the world’s contempt on Muslims, rather than hauling his ass off to the Hague for a war crimes trial.