Relevant to the discussion about whether humanity ought to look to their own home before seeking another, here’s a problem for the techno-fetishists. Solve this very human vexation: 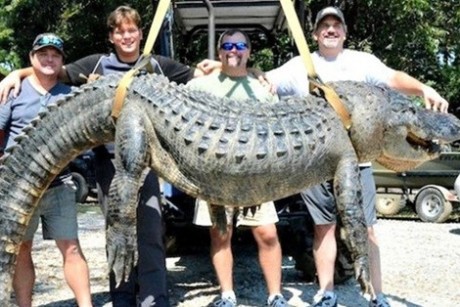 That’s a group of hunters from Mississippi gloating over their kill: a 910 pound alligator. They sportingly converged on it and shot it dead with 6 .50 caliber bullets — they weren’t exactly playing with pop-guns here, and there was about zero threat to them when they’re hunting with cannons.

Afterwards, poking around the corpse, it was discovered that it was 185 years old, and that it had survived the Civil War — its hide contained 9 musket balls that had been shot at it by Confederate troops. And the hunters are smiling, without a hint of shame or guilt or even doubt that it was appropriate to butcher such a magnificent beast.

We don’t teach respect for this world, and we don’t condemn the people who wreck it. What hope is there for humanity?