Last night, as promised, I watched Gasland. It’s an excellent documentary presented in a jarringly low-key style — jarring because every place visited that had extensive fracking was a horror. There were landscapes where farmers and ranchers were trying to make a living, and everywhere you looked, there were drilling rigs and condensate tanks, clouds of toxic vapor, and the water from local wells was coming up yellow to brown to black, fizzing off flammable gasses and saturated with chemical sludge. In some cases, water wells would actually explode.

Josh Fox, the documentarian, had to struggle to get any interviews with the corporate slugs who were greedily promoting this abuse of the environment. The most honest of them said, essentially, that there were always going to be compromises and a tiny bit of pollution was the price we have to pay for our energy; the worst would flat out deny that fracking could be causing any contamination of the water. Right. They snake pipes a mile or two under the ground, and then pump many thousands of liters of water loaded with organic solvents, a witch’s brew of carcinogens and teratogens and greasy poisonous crap, into the rock under such intense pressure that it cracks the confining geology, all to tap into trapped oil and gas, and there’s no way it could possibly leech into aquifers. And they pay desperate affected individuals some small sum, tens of thousands of dollars, to shut up and accept the damage.

This map was shown several times in the movie. All the red areas are deep shale beds, natural gas reservoirs, that are likely candidates for drilling. 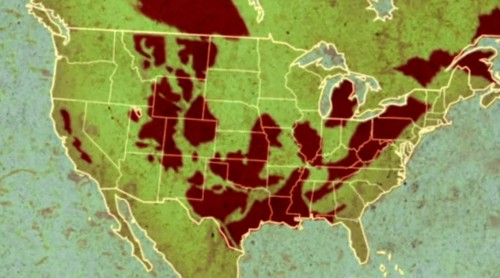 Do you live in any of those places? You should worry. If they aren’t drilling now, they want to soon.

We also got to meet the greatest villain of this century, Dick Cheney. He’s the architect of the legal exemption of fracking companies from the restrictions of the Clean Water Act (among all the other things Ol’ Dick has done to advance the United States of Halliburton). Our government has washed its hands of any responsibilities, and an employee of the Environmental Protection Agency came right out and said the EPA was consciously avoiding getting into dealing with the consequences of fracking.

It’s one of the most depressing movies I’ve seen in years. We’re doomed, aren’t we?

At least there were a few nods to the gallant heroes are actually doing something to try and stem the flood of oil money: the movie has an interview with Theo Colborn, who really deserves wider recognition. It also features the real hero, the planet, with lots of lovely shots of Fox’s home in a secluded bit of the Delaware River basin — a place I remember well, having taken my kids camping and on scouting trips in the lush deep woods of Pennsylvania. That’s what prompted the movie, that that area is threatened with fracking development. All it would take is one neighbor to sell out to a natural gas company, and because the government is dragging its feet on protecting the environment, everyone could enjoy a river filled with benzene and 500 other killer chemicals.

By the way, today Google is celebrating Rachel Carson’s birthday.

We haven’t learned a thing.