After that short post yesterday pointing out the abuse of photoshop to distort women’s bodies, I was briefly harangued by a loon who announced that I obviously did not understand the concept of sexual selection.

Actually, I do understand sexual selection quite well. I fail to see how making images of bodies plastic with photoshop is an example, or how you leap from manipulating pixels to how we can “sculpt…bodies into appealing forms”. Perhaps he thinks it is a kind of sympathetic magic, that if you paint a picture of a woman with balloon breasts and a wasp waist, women will simply comply with your wishes?

I am also impressed with the obliviousness. Sexual selection works both ways — has he ever wondered why some men are obsessed with women’s body parts, wanting them to be a certain size and shape? Exactly who’s brain is being sculpted by nature here?

I should also introduce him to the concept of the supernormal stimulus, the idea that a species can evolve to respond to a triggering stimulus that can be inappropriately strengthened by an exaggerated stimulus. This isn’t necessarily a good thing; for instance, Lorenz found that birds would enthusiastically nurture large fake eggs at the expense of their normal-sized real eggs, which at least isn’t a serious concern in nature, usually (although cuckoos can take advantage of it). There’s also the serious concern about human diet: give a person the choice of a twinkie or a carrot, and guess which one will be most attractive?

Or we could talk about RealDolls, these “life-like” (more like corpse-like) full-sized rubbery plastic dolls with conveniently compliant orifices. Is that an example of “sexual selection”? I suppose you could make a case for it, although it’s not affecting women, but rather selecting out males who waste their time in futile coupling with an infertile assortment of artificial stimuli — futile in both the sense that reproduction will not occur, nor will any bonding with another human being.

Besides, apparently those RealDolls are over-engineered. Simpler models will do the job just fine.

According to a Murfreesboro Police Department report, an officer was dispatched to the bar, where a witness said that Hutton walked to the ATM and “pulled down his pants and underwear exposing his genitals.” Officer M. Rickard added, “Mr. Hutton then attempted to have sexual intercourse with the ATM.”

After his encounter with the ATM, Hutton “then began to walk ‘nude’ around the bar thrusting his hips in the air,” Rickard reported.

Behold the latest generation of sexbot! 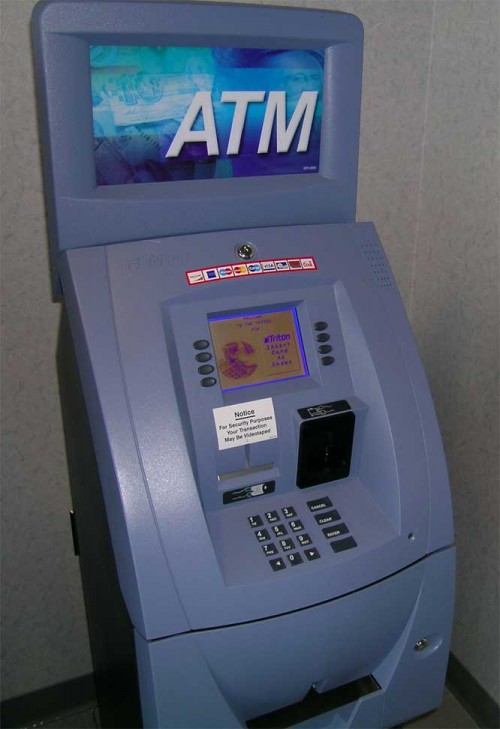 Is that an example of selection? Or just a case of drunken disinhibition exposing the simpler driving machinery of the male sexual urge?

How to argue for evolution » « Mary’s Monday Metazoan: Goofy face