A researcher was studying the effects of rat poison on wildlife in California — it turns out that all the illegal marijuana crops raised there, without any regulatory oversight, are being treated for pests by crooked farmers who just fling bags of persistent poisons around, killing wildlife. These farmers did not like that Mourad Gabriel was pointing out the harm they were doing to the environment, so they self-righteously accused him of collaborating with the hated feds, threatened him, and his family, and poisoned his pet dog.

There is a $20,000 reward for information leading to an arrest.

I want to hurt these awful people even more, and I have a suggestion for revenge. Legalize marijuana. It’ll kill much of their profits and put them under the thumb of agricultural regulatory agencies.

In other drug news, an anti-drug organization called recovery.org has launched a self-defeating campaign to show the awful effects of drugs. Their tactic? Take 100 mug shot photos from police files (which already don’t exactly show people at their best), and then…average the faces together to produce a composite of what the typical pot-smoker, alcohol-drinker, or meth abuser looks like.

I think you can immediately see the flaw in this proposal. Average faces look beautiful. 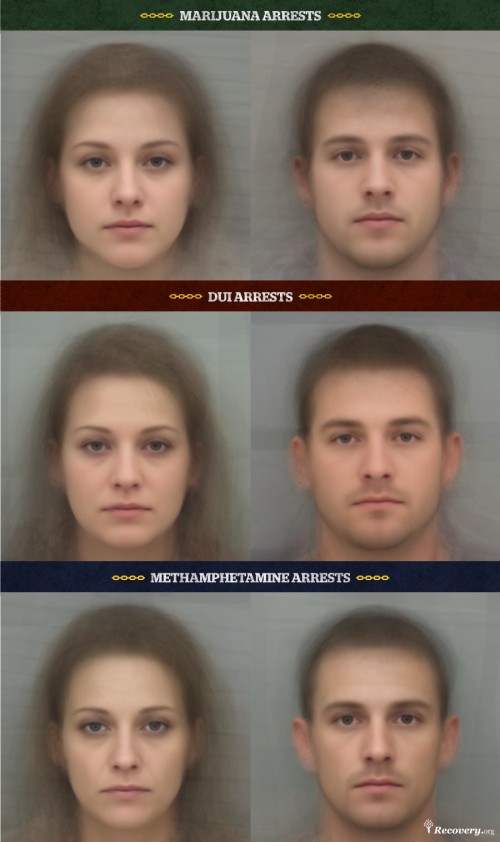 OMG, they all look prettier than I do! And meth looks like it must be a great weight loss drug! You can’t even tell that everyone in the top row must be a puppy-murderer.

I’m going on my marijuana-meth-&-vodka diet tonight, as soon as I get home.