You’ve probably already read Ophelia’s discussion of the latest MRA stupidity: a group of them on Reddit decided to flood Occidental College’s sexual harassment survey system with a collection of fake rape reports. The logic escapes me; people who claim that women make frequent false accusations of rape decide to inflate the statistics with false accusations of their own? Why? It was a spectacular own goal that effectively demonstrated that Men’s Rights Activists don’t actually care about ending rape, but are more interested in throwing up clouds of doubt and confusion to obscure their own repulsive activities and desires.

It was such a backfire that they’re now frantically trying to backtrack (It was so obviously stupid that even MRAs were aware of their mistake? That tells you how stupid it had to have been) and pretend that no, no one with any clout in the men’s rights movement had anything to do with inciting false reports. No, it was 4chan, yeah, that’s the ticket, it’s all the fault of those irresponsible pranksters at 4chan. 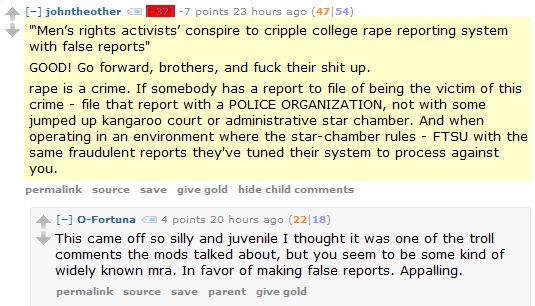 A word for Hembling: Yes, rape is a crime. So is falsely reporting a rape.

And gosh, but Hembling is really an awful person.

Friday Cephalopod: The Passive Detritovore » « The silence of the men