So I was reading Manboobz, which is usually about as low on the referenced depravity scale as I can go, and I ended up clicking on a link in an article which led me to…Stormfront. They were all outraged that some pick up artist was swarthy, yet he was chasing after beautiful pure European white women. That article was appalling enough, but it linked to something about the Neandertals, which is a subject I find interesting, and I clicked on that, and whoomp, down the rabbit hole I went.

I had discovered the bizarre pseudoscientific and profoundly anti-semitic world of Michael Bradley.

There are many things that you will find offensive at that link: the hideous Geocities style page layout, the incoherent rambling content of the text, the stupidity of the arguments, the goddamn racism, so be warned. It’s not my fault if he wrecks your brain or induces nausea.

Plowing through the wall-of-text interspersed with ads begging you to buy his revolutionary books ($49.95 for an e-book this badly written? No thanks), his message is fairly simple and wrong. He thinks there are two kinds of human, with some interbreeding between them: one kind are the tall browed, lean and handsome Cro Magnon people who are scattered around the lowland areas of the globe; the others are short, stocky, hairy people with receding foreheads who arose in the highlands of an area he calls the “Toxic Lozenge”.

This other contending subspecies originated in what I call the “Toxic Lozenge”, a narrow elongated area extending from the Rift Valley lakes of Tanzania, Kenya and southern Ethiopia to the northern Caucasus Mountains. This Toxic Lozenge therefore encompasses the geographic epicentres of both Homo habilis and later Neanderthal development. This Toxic Lozenge is also the original homeland of the Hamitic languages and the later seemingly related Semitic ones.

In case you didn’t get the hint, these Toxic Lozenge residents were descendants of Neandertals, and are the modern Jews and other Semitic people.

Physically, this subspecies is characterized by very great nasal development, extreme hairiness in males, long torsos and short legs, extremely high numerical and spatial intelligence, very little visual artistic ability, a low level of emotional stability, fanatical monotheism, anti-feminism and a predisposition to control, enslave or exterminate “ordinary humanity”. There is some fairly recent anthropological evidence (1990-1991, see “Homo Georgicus” on Wikipedia), coming from the Caucasus Republic of Georgia, that this subspecies may derive from Homo habilis, through the Neanderthals and on to modern living representatives.

However, not all anthropologists agree that Homo habilis should be considered fully “human” as that term is rather loosely defined, but was possibly an aberrant offshoot of either Homo or Australopithecus (see Esau’s Empire I on this website).

That is, people deriving from this Toxic Lozenge in ancient times may not be exactly human and certainly seem to be incompatible with the values and attitudes of “ordinary humanity”. However, recent historical migrants into the Toxic Lozenge represent mostly ordinary African humanity.

Much more important than physical traits, the aggression of this subspecies is responsible for its expansion from its original Toxic Lozenge both east and west to inhabit most of the “Middle East” (especially mountainous regions) and even parts of Europe, western India and northern and eastern Africa, imposing its religious and social values. In short, the people of this Toxic Lozenge have gradually driven a wedge of perhaps “not-quite-human” genes and culture between the ordinary humanity of the West and the ordinary humanity of the Far East. And this wedge has been inexorably expanded by well-known historical events from 5600 BC to the present. Despite the incessant propaganda and disinformation promulgated by this subspecies, adherence to Judaism, Judeo-Christianity and Judeo-Islam are the symptomatic indications of its biological expansion and/or cultural influence.

Oh, look. He’s in favor of some flavor of feminism, and he’s against monotheism, and he later announces that he’s a humanist. He’s one of us! (Cue projectile vomiting and blinding tears.) The othering of Jews as not quite human and on a mission to enslave “ordinary humanity” is a bit off-putting, isn’t it?

You might be wondering what his evidence for this remarkable thesis might be. Well, there are the pictures: 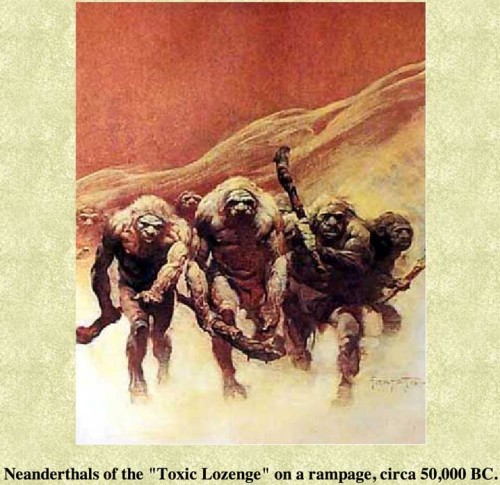 That’s supposed to be a picture of rampaging Jews erupting out of their homeland in the Toxic Lozenge. It might be a little more persuasive if it weren’t a painting by Frank Frazetta that was used to illustrate some sword-and-sorcery fantasy novel.

What about the scientific evidence? He’s not a fan of Svante Paabo, who sequenced the Neandertal genome and determined that Europeans and Asians have a small infusion of Neandertal genes, on the order of about 4%. Paabo is misinterpreting the data, he thinks. Try to follow this logic:

Anyway, that’s the worldwide “Paabo spin” on Neanderthal DNA in modern humans and, looked at this way, “1 to 4 percent” doesn’t amount to much. Figures don’t lie but liars figure.

On June 5, 2010 the world’s population was estimated to be 6.8-billion-plus people (United States Census Bureau, Wikipedia). One percent of that is roughly 68-million and change. Four percent works out to about 278-million people. Odd, isn’t it, that this is about the population of the Middle East, according to my Bloomsbury Pocket Atlas? And this is the geographic homeland of the Semitic peoples, the present Judeo-Islamic Arabs and the Jews. Work it out for yourself using any good atlas.

With good maps and atlases there is a way of looking at this “1 to 4 percent” of Neanderthal DNA in modern humans that makes a great deal of historical sense. What if this Neanderthal DNA is concentrated in the Caucasus Middle East, where this 2010 study admits that Neanderthals and Cro-Magnons (or “Early Modern Humans”) met and interbred? Surely it is reasonable to suppose that the main concentration of the world’s surviving Neanderthal DNA must be in this area, discounting very modern migrations of some people by railway, steamship and aircraft transportation, and that Neanderthal DNA decreases rapidly as distance from the Caucasus centre of interbreeding increases?

You see, Paabo was reporting an average admixture, but if you just assume that all the Neandertals are living in the Middle East, and no Neandertal genes are anywhere else, then you get the same average! As you read further, you discover that this flawed calculation is gradually assumed to be proof of Bradley’s thesis.

And it gets crazier and crazier, and the font gets bigger.

And then…9/11 was a Jewish plot! Obamacare! Hillary Rodham Clinton climbing to the presidency via her Jewish constituency! Jews control Hollywood! Fascism…it isn’t so bad!

It is time for the non-Semitic peoples of the world to come together in a multi-racial alliance under one banner in order to severely limit Semitic activities before they put an end to us and everything else on the planet. I offer the following banner, emblem and symbol. However, I will warn everyone that it may well be too late.

The symbol is a flag with a swastika on it. He thinks he’s too old to run this movement, but he has a suggestion for a charismatic person who could: Mel Gibson.

I think I need to lie down. Or get drunk. It’s always something, someone who has to show how low and stupid and vile humans can get.