The brain drain is beginning. Nearly 20% of American scientists would like to get out of this country.

New data compiled by a coalition of top scientific and medical research groups show that a large majority of scientists are receiving less federal help than they were three years ago, despite spending far more time writing grants in search of it. Nearly one-fifth of scientists are considering going overseas to continue their research because of the poor funding climate in America.

Why, you might ask? Because funding for research is drying up everywhere. 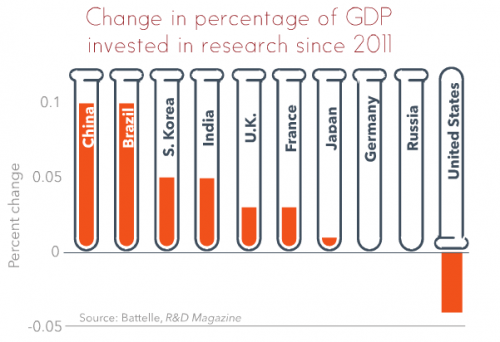 That could be fixed, you know. Divert that cash that’s being deployed to prepare to bomb Syria and other foreign countries, and we could probably rebuild our scientific and technological infrastructure before it’s too late.

Although, with all the idiots emerging from public education believing in nonsense while the media cheer them on, it might already be too late.

All these rape flavors… » « Midwest Society for Developmental Biology Meeting