While we’ve been waiting and waiting for the physicists to get their act together and deliver on Mr Fusion home energy sources and flying cars, the biologists have been making great progress on the kinds of things that turn biologists on. The latest development: growing tiny little human brains in a bucket. Only let’s not call them brains…they are cerebral organoids. Hugo Gernsback would be so proud.

Here’s the latest development. Start with embryonic human stem cells, or induced pluripotent stem cells (cells which you’ve reset to a kind of embryonic state by using a virus to transfect them with the genes OCT4, SOX2, KLF4 and MYC, which trigger a change to a pluripotent state). Culture them in a cocktail of chemicals like basic fibroblastic growth factor and retinoic acid, which induces the cells to become neurectoderm, a precursor tissue of the nervous system. Imbed these cells in a gelatinous capsule that gives them a framework on which to grow, and also prevents them from just sprawling out into an amorphous neurectodermal sheet. Let them grow in a spinning bioreactor which circulates nutrients around them, and watch. They begin to form structures resembling those of the embryonic human brain, all by themselves.

They show many of the properties of normal embryonic brains. Brains develop from the inside out; new neurons arise deep inside, and then migrate outwards along radial glia to the surface. These mini-brains show similar behavior, forming the beginnings of a laminar structure with roughly the same pattern of growth. They exhibit regional specification. We have a forebrain, midbrain, and hindbrain, for instance, and there are molecular markers for these areas; those molecular markers are selectively expressed in areas of the mini-brains, too. During development, our neurons exhibit fleeting electrical activity, especially the production of calcium action potentials (we gradually switch to sodium action potentials as the nervous system matures). These brains have bursts of calcium activity which can be diminished with tetrodotoxin, a nerve poison that affects signal transmission in neurons. 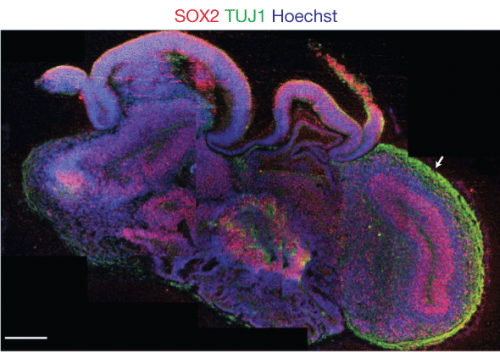 Awesome. Before you start imagining growing complete adult human brains in a vat to the point where they start doing philosophy, though, there are realistic limitations.

While there are regions expressing markers for typical human brain regions, they aren’t well organized — I looked at the sections of cerebral organoids, and while bits and pieces looked familiar, they weren’t in their canonical relationships to one another. It’s a kind of scrambled brain.

The laminar structure of the brain doesn’t fully form — it’s just the rough beginnings. It really is like a very early embryonic brain, and is not going to function to generate thoughts and perceptions.

It’s only brain tissue. They aren’t growing elements of the circulatory system, for instance, so there are no blood vessels delivering nutrients. That limits growth, and the largest cerebral organoids are only about 4mm in diameter. That might only be enough to generate an assistant professor of philosophy. (I joke! Don’t come after me, philosophy fans.)

Now this is pretty darned cool, and would be a shoo-in to win first prize at the Mad Science Fair, but you might be wondering what you can use it for. These are not functional brains, so no, you militarists, you can’t use them to control cruise missiles. What they are good for is studying developmental processes that build human brains (pure science!) and for figuring out the mechanistic causes of serious brain disorders (medical science!).

And the authors turned around and started doing just that. There are known defects that affect the proliferation of cells building structures in the brain, genetic diseases like microcephaly. You cannot do experiments on microcephalic human beings, and it’s been very difficult to generate good animal models of microcephaly — we have such unusual brains to begin with that it’s hard to find a brain analogous in sufficient detail in mice. But here’s what they can do.

They had a patient with microcephaly, with a known genetic cause (a mutation in a gene called CDK5RAP2). They can’t experiment on his brain, obviously, but what they could do is take a few of his skin cells, transfect them with the four inducing genes, and produce a clone which could be cultured in a dish and put through the organoid production procedure and make little tiny copies of his embryonic brain state. Now you can do experiments.

What they observed was that some brain areas in the organoids were smaller (complicated by the fact that overall growth was reduced), and that there more more neurons and fewer glia in affected regions. The hypothesis is that CDK5RAP2 maintains cells in a dividing state, and it’s absence causes premature maturation of neurons, which leads to reduced total numbers of neurons in the adult. They also tried inducing greater CDK5RAP2 in the organoids to rescue the phenotype — the experiment was confused by the fact that CDK5RAP2 overproduction seems to trigger cell death, and they do not have precise control over dosages, but they do find suggestions that glial production is rescued. They also did the complementary experiment of RNAi knockouts of CDK5RAP2 in non-patient organoids, and they did see a surge of neuron production. So it looks like they’re getting a good handle on the cellular processes behind this form of microcephaly.

So what they’ve built is a useful model for studying early brain development in humans that doesn’t involve experimenting on any actual humans. This is going to be useful for all sorts of developmental disorders.

Midwest Society for Developmental Biology Meeting » « What do you get when a creationist visits the Galapagos?