It was a horrific story out of Cleveland: three brothers have been arrested for imprisoning three women for over a decade in their home. I can’t even imagine the nightmare those women lived through.

Charles Ramsey, the neighbor who helped break them out, at least provides a little light-hearted relief.

And right now we’re starting to see pictures of tearful reunions with family members who thought the missing women were lost forever. 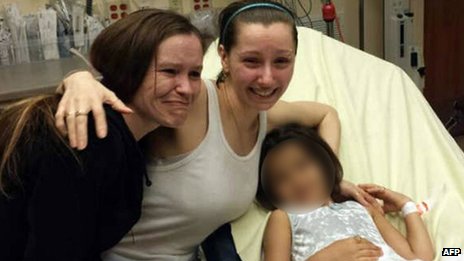 But let’s not forget, this isn’t all about happy outcomes. Those women had years of their young lives stolen from them, were locked away from the world, and had many losses — Amanda Berry’s mother died 3 years after she was kidnapped. None of that is coming back.

What the hell was wrong with those three men that they could do this? Did they just see those women as toys to be possessed, with no empathy and no human feeling of any kind for what they did to them?

As has been noted in the comments, Sylvia Browne ‘predicted’ that Amanda Berry was dead and “in the water” in 2004. She said that to her mother on the Montel Williams show!

Browne is an evil amoral fraud, and Montel Williams is a repulsive enabler.

The first day of the rest of my summer! » « The tent metaphor gets a workout