That’s right: a mob of snarling, vicious atheists on PCP descended on an innocent, pious group of reverent Christians, on their knees and heads bowed in prayer, and brutally clubbed and stabbed them. Just ask Ken Ham.

Oh, wait, no…what actually happened is that the Answers-in-Genesis inspired exam given at this one school came to light, and thousands of people expressed their dismay at the miseducation being delivered in the name of Jesus Christ. You’ve probably seen it. It’s so, so dumb. 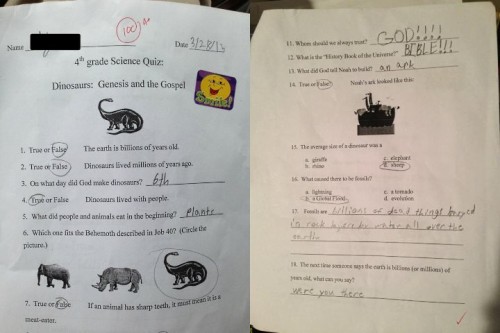 It’s got everything: the earth is only thousands of years old, dinosaurs and people coexisted, “Were you there?” Ken Ham is shocked that people all around the country saw that abominable collection of lies and were appalled, and immediately curled up into the traditional persecuted Christian ball of martyrdom.

Now, this Christian academy is not a large school. Yet the atheists went after it with incredible fervor. The school administrator informed us she knew that the school would be involved in a spiritual battle after the quiz went public, but she was not expecting such ferocity. She told us she was shocked at the level of hate that the atheists poured down upon her, the teacher, and the school in general.

This is clearly a sign that the atheists are taking over the world and opposing good Christian morality. Ham even has a list of all the evil things atheists are doing.

How Are Atheists Becoming More Aggressive in America?

My reply consists of simply referencing the material on the Answers in Genesis site.