The baseball player Jose Canseco made a remarkable series of tweets yesterday. 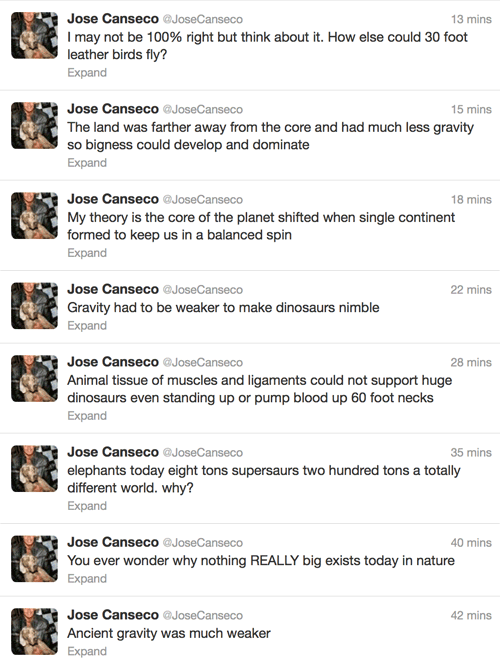 I may not be 100% right but think about it. How else could 30 foot leather birds fly?
The land was farther away from the core and had much less gravity so bigness could develop and dominate
My theory is the core of the planet shifted when single continent formed to keep us in a balanced spin
Gravity had to be weaker to make dinosaurs nimble
Animal tissue of muscles and ligaments could not support huge dinosaurs even standing up or pump blood up 60 foot necks
elephants today eight tons supersaurs two hundred tons a totally different world. why?
You ever wonder why nothing REALLY big exists today in nature
Ancient gravity was much weaker

Deja vu, man, deja vu. Any old regulars from the talk.origins usenet group will remember this one: Ted Holden and his endless arguments for Velikovskian catastrophism. Holden also claimed that earth’s gravity had to have been much lower for dinosaurs to stand up.

Ted Holden has been repeatedly posting the claim that sauropod dinosaurs were too large to have existed in 1g acceleration. His argument is based on simple square-cube scaling of human weightlifter performance (in particular, the performance of Bill Kazmaier). His conclusion is that nothing larger than an elephant is possible in 1g. His proposed solution is a “reduction in the felt effect of gravity” (by which he seems to mean the effective acceleration), due to a variant of Velikovskian Catastrophism, often called Saturnism. Ted’s materials in their current form can be found on his web pages dealing with catastrophism.

For those not familiar with Velikovsky, he was a pseudoscientist whose claim to fame was that he so nimbly straddled two disciplines and befuddled people on either side. He was a classical scholar who used his interpretations of ancient texts to claim there was evidence of astronomical catastrophes in Biblical times (his scholarship there impressed astronomers and left the real classical scholars laughing), while also peddling an astronomical model that had planets whizzing out of their orbits and zooming by Earth in near-collisions that caused the disasters in the Bible and other ancient civilizations (his physics dazzled the classical scholars but had physicists gawping in astonishment at their absurdity).

Holden at least tried to do the math; he just flopped and did it wrong. Canseco hasn’t even done that much. Vague and uninformed impressions are not justifications for rejecting science. Here are some quick arguments against this nonsense of dinosaurs living in reduced gravity.

At least Canseco is not as delusional as Holden. But if he starts tweeting about giant teratorns carrying Neandertals on their backs, who then fly to Mars and build giant monuments in Cydonia, get him some help, OK?