Hey all. I’ve been more quiet than usual around these parts for a couple weeks for a couple reasons, so I thought I’d re-enter Hordespace by giving an update on a few things that have happened since I last said something substantive around here. (That last straight line is my gift to you.)

To be honest, it’s been hard to write. The last few weeks have actually kind of sucked. The two biggest reasons have been an approaching anniversary that dropped today: six years on and it still takes the wind out of my sails for a few weeks beforehand, often without my really realizing what’s going on. I’ve been pretty much here for the last week or so.

The other reason is financial: my income is supporting two of us, which means  certain purchases are out of reach, which means the Wellbutrin I’ve used to control my ADD for the last decade or so has been unaffordable since August or so, which means it’s much harder to get the paid work done, which is a merry little maelström of suckage. My usual habit since I started blogging is to spend time writing about the problems I have, which helps me work them out in my head and every once in a while helps other people. But as warm and fuzzy and supportive as you hordelings are, the notion of  giving the s’pitters a chance to fap over my admittedly minor problems? There isn’t a steel brush sturdy enough for the Silkwood shower I’d need after that.  So instead I haven’t written about it. Which makes it easier on the readers but not so much on me.

I have managed to get some stuff done, though. We enticed Meera Lee Sethi, a wonderful science writer, to join us over at the Coyot.es Network with a new blog Dispersal Range, joining Charlie and Madhu and Aunt Ron and Shaun and BRW and myself . Once we add a couple more bio-eco-radical type bloggers we’ll have ourselves a formal launch party. (If you think you’d fit there, let me know.)

Work at KCET proceeds. My editor there formalized my natural history writing into a blog called The Hidden Desert, now graced with a painting by Carl Buell of myself and two other extinct mammals, and after a few more months I’ll be compiling essays there into a book. My sociopolitical writing there is becoming a blog called “East CA,” which with The Hidden Desert and ReWire (my renewable energy work at KCET) and Coyote Crossing and here amounts to five blogs I write for, likely a violation of some Anti-Trust law or other. 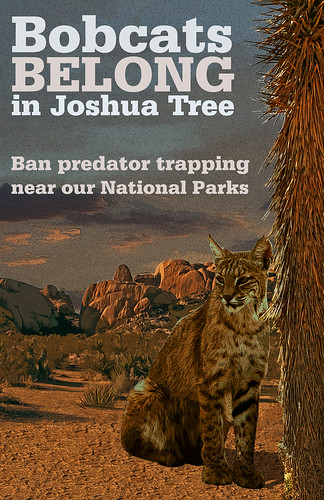 Off the internet, my little town here has been abuzz with anti-trapping sentiment. A local friend found a bobcat trap on his land, publicized the find, and people here are outraged. There are three people around here who trap the cats — legally in season — and dismantle them to sell the parts. It gave me an opportunity to do something non-verbal, shown at left, which was a small side benefit for that part of my brian that doesn’t word. The linked Flickr page has a version big enough to print at poster size, should you be interested.

I’ve also had a couple speaking engagements, mainly here in the Morongo Basin, and another coming up for those of you who might be nearby: on February 15, I’ll be giving my “old growth desert plants” lecture at the Black Rock Visitor Center in Joshua Tree National Park as part of the Joshua Tree National Park Association’s community lecture series. It’s free, so come on by if you’re in the desert.

Lastly for now: In October, after years of writing a whole lot of scathing things about BrightSource — the solar company that killed the valley I loved most in the Mojave — my editor at KCET and I were asked to meet with a couple high-level execs from that company who had “concerns about my fairness” in advocating for cheaper, faster, more efficient and more democratic rooftop solar over the business as usual utility-scale long-distance transmission kind. The execs — including the firm’s VP for government and public relations —  brought a document along with them to our friendly little meeting. They’d had an intern find everything I’d written about the company for the last four years, put it into a Word document, and then highlighted what they didn’t like. Those highlighted things they didn’t like, oddly, included some of my favorite things I’ve ever written, including this paragraph on a solar lobbying group’s donors:

BrightSource and SolarReserve and First Solar are some of the worst actors in the rush to destroy the desert for solar energy installations. Not all the firms on the list are bad actors necessarily. Some of those firms just build PV cells. Some are service providers of various kinds: accountants, trade associations, law firms and such that serve the big solar industry. On first glance that last is distasteful, I agree. But in the United States, we’ve long held that even the most scurrilous people — confidence men, Nazi synagogue vandals, pedophiles and serial cannibal murderers — have a right to legal consultation, and thus it’s only a little bit of a stretch to decide that desert solar contractors probably ought to have that right as well.

The BrightSource people really didn’t like that at all. Some people have no senses of humor. Anyway, I decided to regard BrightSource’s annotations as a metatextual gift to me:  I’m cleaning it up a little bit and will be offering a PDF for sale for a couple dollars. All proceeds will go to getting me some fucking Ritalin. I’ll let you know when it’s up.

Enough about me. How’ve you been?

Aw, jeez, Minnesotans are always talking about the weather » « Oh, the things you’ll learn about “Science” from the interwebs!