Ken Ham was doing an interview, and he was asked a difficult question: “How did men get the dinosaurs to not buck them off of their saddles when people rode then? Were the dinosaurs more domesticated and well behaved because there wasn’t as much sin back then?” Good one. The creationists do tend to smuggle in a lot of rather unbiblical stuff into their mythology while simultaneously claiming to be strict literalists, so I’d like to see how they came up with that story, too.

Ham’s answer: Gosh, I don’t know. Where did you ever get that weird idea?

I don’t know where people get the idea that people rode dinosaurs. I mean, there’s no evidence in the Bible that that is so. When Job was looking at Behemoth, the description there… there’s nothing to do with people riding dinosaurs. We don’t know how people interacted with dinosaurs.

Go read the post, it’s hilarious. Where did people get that idea? From Ken Ham. He publishes books with illustrations of people riding dinosaurs, and he’s got a fiberglass dinosaur with a saddle on it in his “museum”.

He also distributes powerpoint slides for educators, loosely defined, to use in the classroom. Like these: 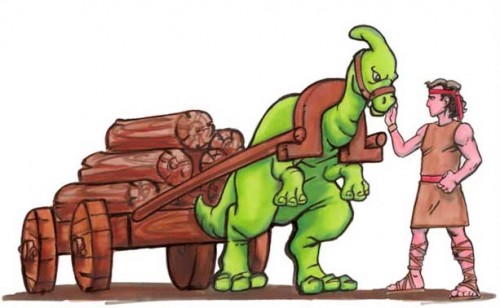 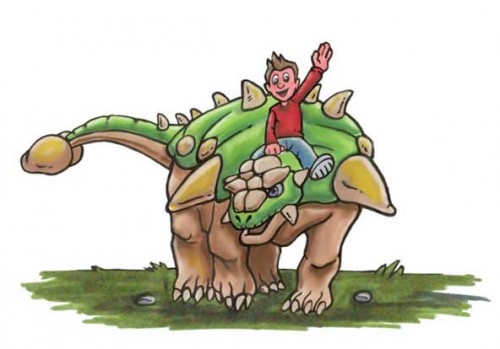 It’s rather disingenuous of him to declare that he doesn’t know where these wacky ideas come from, isn’t it?

Criminals! Every one of you! » « More trivial excuses for the anti-choicers