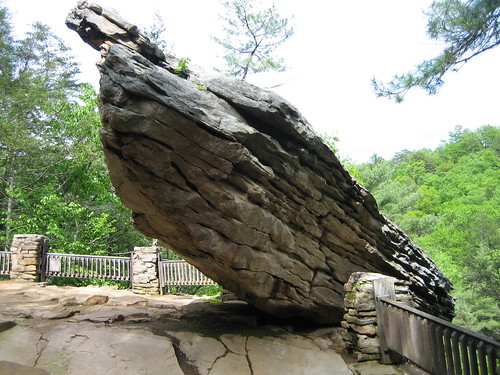 One of the things that bugs me most about some of my fellow environmentalists, aside from the patchouli, is the near-religious adherence — even among those enviros who eschew religion — to the notion that natural ecological systems have an innate and emergent self-repairing property. It’s a dangerous idea that breeds complacency, and it’s really widespread.

I’m painting with abroad brush here, I know. I’ll continue to do so for convenience’s sake, but it’s true that a number of enviro types  have dropped the notion of a “balance of nature.” In my experience, wildlife biologists and people who study aridland ecosystems are especially likely to have deprecated the Gaia idea of Earth being an overarching, self-regulating system. And paleontologists.

It’s easy to understand how the notion might have come about. Ecosystems get more diverse over time, with the species in them evolving as many ways of making a living as can fit in the space available, and so disruption of an ecosystem might merely open up opportunities for organisms to grow and reproduce. Those disruptions might be truly cyclical, as with tides flooding and draining a tidepool twice a day or freezing temperatures descending on half a continent for four months every year, or they might be cyclical in the stochastic sense — forest fires, 500-year floods and droughts, the occasional exotic pathogen making its way to a new continent. If you stand back and squint, those cycles can look like stability as organisms are killed off and new ones grow to replace them. Especially if you don’t pay attention to the fact that, say, the regrown forest no longer includes American chestnuts.

Unless you eradicate every living thing from a wide area when you disturb it, species will colonize that disturbed area as fast as they can. They compete with one another, take advantage of opportunities the other colonizing species provide in relationships parasitic and commensal and endosymbiotic, fill every emerging niche in the developing biotic landscape of the disturbed area. Eventually, an ecological regime will likely develop where the pace of change is much slower. In humid temperate forests, this often happens when tall trees whose seedlings can develop in deep shade become dominant. Without further disturbance, forests of these trees can remain relatively unchanged for a long time, because they’ve evolved characteristics that make it very difficult to compete with them for domination of the landscape. But there’s really not much difference between a hardwood “climax forest” and a weed-filled fallow field: they’re both the scene of organisms competing and interacting with one another in complex ways.

We humans look at things from our own perspective, so the “climax forest” seems like a different animal altogether. A weed lot can change utterly in a couple of years. It may take 200 years for a lucky hemlock seedling’s descendants to take over an ancient hardwood forest dominated by sugar maple. That forest seems stable to us, but that’s because we don’t live long enough to notice the shift. The same general dynamics apply.

I worked as an environmental writer and editor in the San Francisco Bay Area for close to 20 years, and the San Francisco Bay Area is full of very thoughtful people who form thinktanks and salons and such, and holism and systems thinking have been in vogue with those people for quite some time. And one of the things you hear systems thinking types say fairly often about complex systems such as ecosystems are “self-regulating.” That’s the whole Gaia idea in a nutshell: the Earth “acts” to “heal” damage to its living systems.

When I’ve pressed systems thinkers on what they mean by “self-regulation,” they will sometimes talk about negative feedback causing homeostasis, like for example predators keeping prey numbers in check, ensuring the prey don’t eat all their food, ensuring there are future prey, ensuring there are future predators to keep prey numbers controlled  — despite the fact that the mechanisms called “negative feedback” in one setting can just as easily cause dramatic change in an ecosystem. If there are 70 pumas on a large island with 10,000 deer, the predator-prey ration may well become cyclically stable. If it’s a smaller island with two pumas and eight deer, the very same mechanism will result in an island with neither pumas nor deer in rather short order.

It seems to me that “negative feedback” thus becomes less a defining characteristic of complex systems and more an artificial category of dynamics defined by their outcomes, after those outcomes happen.

I worked with a group of people once who were writing a systems-based environmental science curriculum for the California Department of Education. The chief  idea behind this curriculum was that California’s environment was a complex system, and that complex systems predictably behaved in certain ways, one of which was that they had a tendency to seek stable states. I accepted this uncritically for a while: it’s pretty much received wisdom among a certain set of enviros. But the more I thought about it, the more it fell apart.

What is a “stable state”? A set of conditions that lasts for a relatively long time.

What indicates a “tendency to seek stable states”? The system spends more time in the stable states than in the unstable ones.

In other words, a system going through change spends more time in the states that last longer.

I didn’t keep that gig for very long.

Here’s the thing: people really, really want to believe that ecosystems are self-repairing, because that way we can excuse the fact that our very existence these days seems to rend that hopefully self-healing fabric. The notion that ecosystems’ seeming stability is a combination of chance and inertia is a little frightening. It’s scary to think that whatever ecological equilibrium we enjoy might be best explained metaphorically as the cumulative inertia of a quintillion solar-powered flywheels each spinning on their own rather than as a benevolent Earth Mother taking care of us.

It suggests that as we stop one of those flywheels after another, we’ll eventually find that one too many.

Why I am an atheist – Barbara Eckstein » « I’m going to be in Kentucky next week!