It’s going to take a few days to recover from last weekend — I was participating in CONvergence, a regional Science Fiction and Fantasy convention. It was a fatiguing load of fun, you should have been there. You should go to an occasional non-atheist/skeptic conference yourself! Trust me, it’s relevant.

I’m a guy who’s into promoting godlessness and science, and there are two kinds of events I go to. Right now, there are a growing number of atheist/skeptic conferences that promote our causes, and draw in large numbers of people who already support them; these are internal events that strengthen and reinforce the movement, and in which we can also emphasize specific strains of thought (I tend to push more science at these meetings, for instance). There are also events which are more outreach: talking to people who are not in this movement, but maybe share some common interests. It’s internal vs. external, movement building vs. outreach.

Man, we godless science folk ought to spend more time at SF&F conventions. These are not atheist conventions, but the audience is largely receptive to our ideas, and is especially enthusiastic about science. You can do a lot of communicating at these things, and you can also get a lot of feedback from people you might not normally find showing up at our stodgy ol’ atheist meetings. I also think we can learn a lot about how to run a wild and active conference at relatively little cost.

So let me tell you a little bit about my perspective on CONvergence. It’s probably not what most atheists or scientists expect: it’s more of an unconference, with a layer of preplanning. An unconference, if you aren’t familiar with the term, is a participant-driven meeting, in which the agenda is created by the attendees at the start of the meeting; typically, there’ll be a whiteboard with a grid specifying rooms and timeslots, and people just start writing in descriptions of discussions they’re willing to lead, and sign up on the spot. It’s a good way to break apart typical hierarchies and get broader involvement.

CONvergence isn’t run exactly that way. There are meetings and proposals made months in advance about what subjects to discuss, but they are entirely participant-submitted. You have to get involved in organization to some degree in order to get your ideas on the program, but it’s not difficult — as long as you’re able to begin planning up to a year in advance. We (that is, Freethoughtblogs and Skepchick) submitted proposals for topics way, way back in November/December; some of them were rejected, some accepted at a meeting of the planning committee, and of course a long list of other proposals were submitted by other people.

Then over the next few months people used that amazing construct called the internet to sign up for direct participation in various topics of interest. For instance, here’s the list of subjects I joined in over this past weekend; most of these were ideas suggested by us for the science/skepticism track, but a few were suggested by strangers and I signed up for them because they looked cool:

Final CONvergence: Doomsday Scenarios
The zombies are right outside the door. Which geeks do you keep close and which to you push into the parking lot as bait. Surviving apocalyptic scenarios convention style! Panelists: Jason Thibeault, Adam Whitlatch, Robert Smith?, Matt Lowry, PZ Myers

The Physiology of Drugs & Alcohol
Does alcohol and pot kill brain cells? Can “magic” mushrooms help with depression? Are cigarettes worse than heroin? A discussion of the myths, misconceptions and science behind our cultures favorite poisons. Panelists: Bruce Miller, PZ Myers, Maggie Koerth Baker, Anne Sauer

Evolution and the Female Orgasm
A hot topic; there is no evidence of selection for orgasm in women but rather, it seems to be a side effect of selection for the male orgasm. Some people argue there must be some adaptive purpose. Panelists: Greg Laden, PZ Myers, Heina Dadabhoy, Rebecca Watson, Craig A. Finseth

Alien Evolution
What does the history of life on Earth tell us about what we might expect about life on other planets? Is it reasonable to expect to find humanoids on other worlds? Panelists: Greg Laden, PZ Myers, Bug Girl, Emily Finke, Lori Fischer

Mutants!
We’re all mutants. Here’s how we know and the truth about what mutations actually do. Panelists: PZ Myers, Bug Girl, Greg Laden, Lori Fischer

The Science of Evolution
Exploring what is new and interesting in the study of evolution. Panelists: Greg Laden, Bug Girl, Matt Kuchta, PZ Myers

Ancient Alien Debate
Is there evidence of alien influence on ancient society or not? Our panel of experts will debate the merits of the evidence. Panelists: Scotty Roberts, Greg Laden, James Johnson, Desiree Schell (mod), PZ Myers

Invisible Superheroes
We know you’ve heard of Marie Curie. Who else? Women in science who made amazing strides but were forgotten by history. Panelists: Laura Okagaki, Rebecca Watson, PZ Myers

Squid
Science, lore and fiction of the most exotic creature of the briny deep. Why? Because they are awesome! Panelists: PZ Myers, Greg Laden, Matt Kuchta, Laura Okagaki 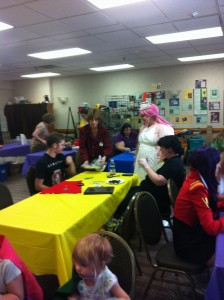 There were also a couple of children’s activities held in an area called the Sandbox — these were hands-on events for kids and adults. My wife Mary was the lead on these two, I just came along to help.

Bones
Discover what an owl had for dinner! Dissect an owl pellet to solve the mystery and reveal clues about the owl’s diet and predator/prey relationships. What types of bones will you find in your pellet?

Notice that these topics are of wider interest than simply SF&F, although they also overlap with the interests of fans of SF&F. You might be surprised at the breadth of the conversations that go on in these places.

Notice also that none of these events are straight lectures — they’re all panel discussions, with 4-6 people all sitting at a table in the front of the room. Right away, you don’t get to dominate the discussion: you should have a few minutes worth of talking ready ahead of time, but be prepared for a lot of back-and-forth and for interesting tangents. Also, if you’re topic is of general interest, expect 50-100+ people to stroll in to listen and chime in. There is an expectation by audiences at these events that there will be substantial time for Q&A and that they will get to participate, too.

It’s like a team-taught class with students who want to be there and are primed to contribute their ideas. IT IS SO MUCH FUN. You should go to one and try it.

And really, these events are everywhere. If you’re in the upper Midwest, yeah, put CONvergence on your list, but otherwise, there are lists of conventions; if you’re in a reasonable sized city or college town, there will almost certainly be one nearby at some time. Some are more specific than others — there are cons dedicated to nothing but Star Trek, for instance — so check their web sites to see if their range of interests overlaps with yours. Or if you’re really motivated, organize a science/skepticism track within the framework of a local con yourself; these have become popular since some of the biggest cons, like Dragon*Con, have been doing them.

Another important aspect of these events is the social scene. Have you ever been to a meeting where you all say to yourselves that the best part is the time between the talks, or in the bar afterwards? SF&F cons know this and make it central to the event. Most of the fun comes from the socializing with a community of people with similar interests. Parties are huge. 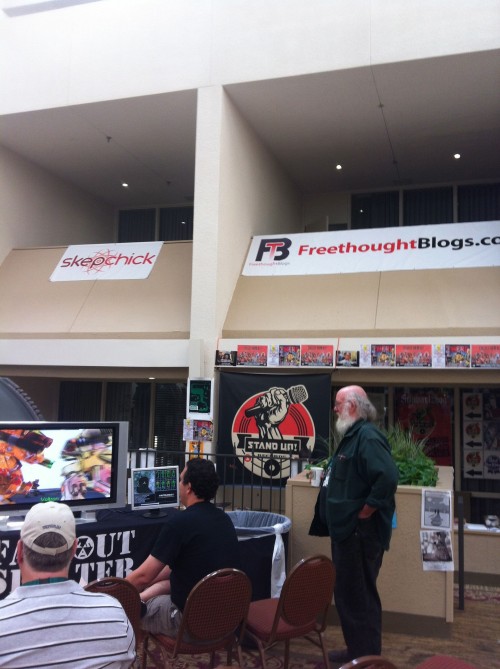 So this year, Freethoughtblogs joined Skepchick in sponsoring a party room. We had large rooms with a veranda opening onto the central courtyard, and we just opened the door from 8pm to 1am and invited everyone at the con to stop by and talk and drink and have a good time — which would have been impossible with almost 6,000 attendees, except that dozens of other groups were doing the same thing, so people just circulated all night long between the different groups. It was a blast.

It’s also a great way to get community involvement. A party requires a lot of volunteer work, and we tapped into a huge team of people to pull it off.

We had two people in charge of managing everything. On the Freethoughtblogs side, Mary was the handler who kept everything moving, and on the Skepchick side, Kammy ran the show. It took a lot of work to put everything together, and these two bore the brunt of it. Poor Mary didn’t even get to enjoy the party that much, since she was often off doing the essential chores to keep it going.

We were also very fortunate to have connections with Mel, who works with the Guthrie Theater and gave us a deal and much physical help with getting decor for our rooms.

We had the advantage of a party for a blog network, so we had a team of people who just hung out to stimulate conversations: Brianne, Dan, Stephanie, Greg, Cristina (brought over from Romania by Skepchick, so she spent a fair amount of time with them), and Jason. They kept it all lively all night long. 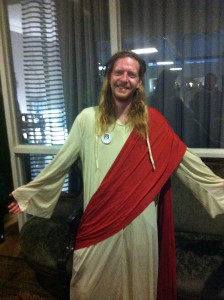 We had volunteers to help with duties like tending bar and keeping food trays filled and advertising and also contributing to the discussion. We had a fine crew of UMM students and former students: Josh, James, Joseph, and Kele. We turned it into a family reunion, so my progeny, Alaric (dressed as Jesus the whole time), Connlann, Skatje and her boyfriend Kyle were all there working the crowds (I knew there was a reason we had them). We made new friends like Phil who just decided to help us out. And of course, this was in collaboration with the Skepchicks, who have had several years of experience doing this sort of thing, and who could be counted on to occasionally stroll through our party room and shake it up.

It all worked because we did it together. That’s a good lesson. 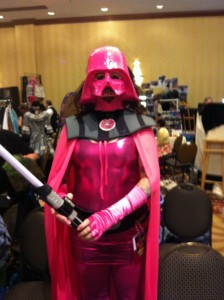 Now maybe you’re sitting there thinking that you have absolutely no interest in science fiction — you think Klingons are silly, you never read the genre, and you don’t have a clue what “cosplay” means. That’s OK, don’t go. Follow your own interests, and get out and share them as an atheist in whatever format your other communities prefer. For example, a group of pharyngula-style godless people are attending the Rhinebeck Sheep and Wool Festival, where they will conform to the mores and conventions of that community, while representing their other interests as well. Not abrasively, not proselytizing, not even aggressively — and we weren’t any of those things at CONvergence, either — but being themselves and participating.

That’s outreach. That’s making people comfortable with atheism. That’s community expanding. We need more of it, in all kinds of venues.

You might also discover all kinds of new friends with common interests. For instance, at CONvergence we discovered Geeks without God, a new podcast for geeks, atheists, and comedians…their website now features a whole series of posts from the contributors about why they are atheists, which sounds awfully familiar. Did you know we’re everywhere? It’s about time we all looked up and made wider connections.

Did Ancient Aliens visit the earth and guide human evolution? » « An important correction!