AAAAAAAAAARGH! Someone is wrong on the internet, and I don’t know whether to scream or to facepalm! (I tried doing both at once, but then it just comes out as a muffled gargle.)

Please go look at this creationist comic called “How Darwin Got It Wrong”. It’s typical creationist garbage, and practically every panel is wrong, wrong, wrong…yet it purports to be an objective discussion of the scientific problems with evolution. The author, however, knows no biology at all. 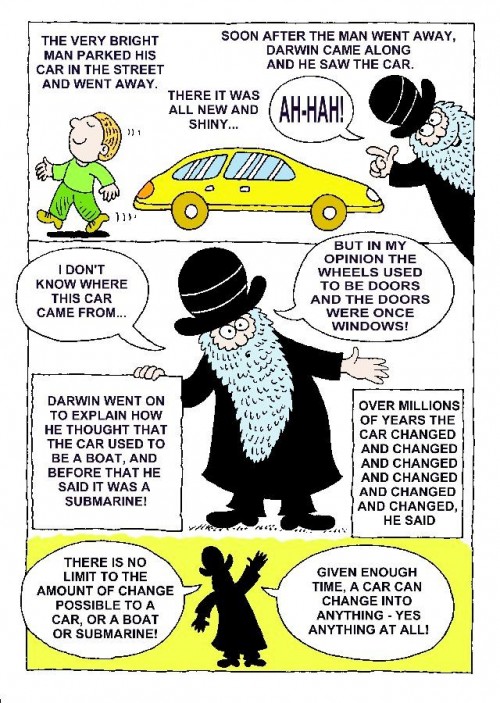 Now I know I’m supposed to be an educator, and ignorance should be something I patiently correct, but this page is so stupid and wrong it just makes me furious. 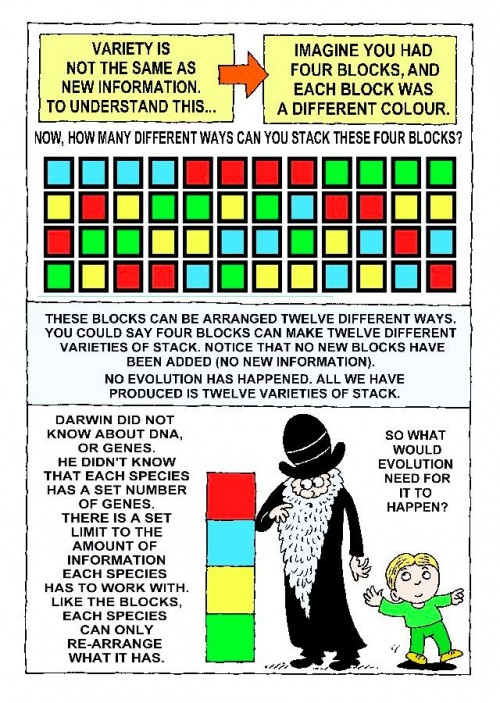 It doesn’t even get its premises right! Those aren’t all the different ways you can stack four blocks — the correct answer is 4!, or 24. And it doesn’t even make sense to argue that there is no information in the arrangement of the bits in the code — of course there is. If there wasn’t, we could just print out individual letters of the alphabet, dump them in a sack, and hand them to the snotty little kid in the cartoon, and tell him, “here’s your bible, go read it.”

And then…”EACH SPECIES HAS A SET NUMBER OF GENES.” No, it doesn’t. There are deletions and duplications, there are copy number variants, there are all kinds of ways gene numbers vary within populations. That statement is simply a lie.

And then the author indulges in a little begging of the question. 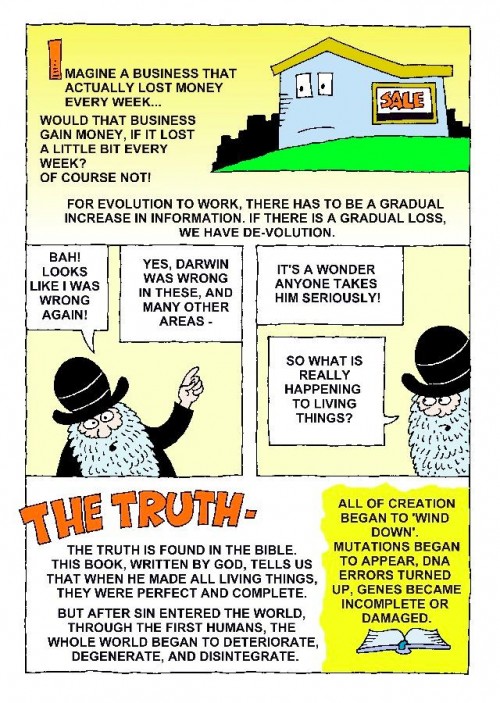 Imagine a form of inheritance that lost a gene every generation. Well then, smarty pants, E. coli, with less than 5000 genes, would be extinct within a few years! This guy has children; does he consider them inferior to him, because of the inevitable decay of their genes? It is simply not the case that genetic information cannot increase.

One more: this guy has loads of these dumb, ignorant cartoons all over the place, so here’s one with a classic quote mine. 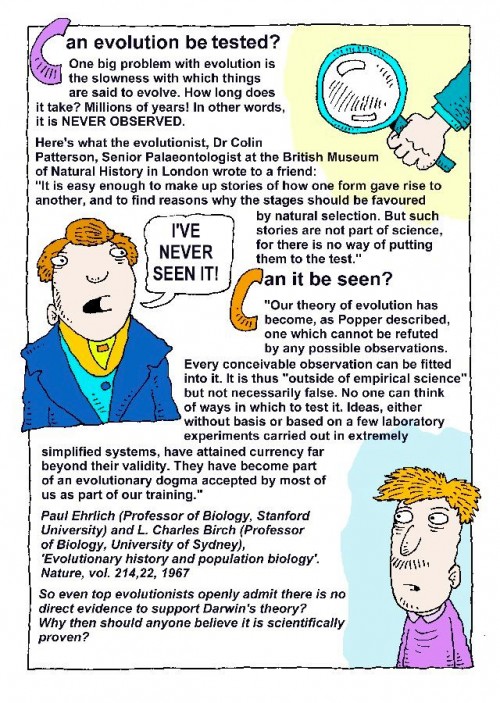 I looked up the paper. Birch and Ehrlich did say that; it’s a paper criticizing fellow ecologists who use evolutionary assumptions to short-circuit the hard work of doing ecological analyses. Our cartoonist leaves off the next few sentences:

The cure seems to us not to be a discarding of the modern synthesis of evolutionary theory, but more scepticism about its tenets. In population biology, more work is need in elucidating the the general properties of populations, both those made up of two or more species, without reference to dogmas or guesses about how they evolved. First we need answers to questions such as (1) How frequently do populations become extinct in nature? (2) Do most populations have self-regulating properties? (3) How frequently do populations utilize the same limited resources in nature? (4) What kinds of selection pressure does such utilization impose on each population? (5) Is great reduction of gene flow necessary for differentiation of populations in nature? (6) How are community complexity and stability best defined and measured? (7) What is the relationship between complexity and stability? Then we can see how the answers fit into the modern synthesis.

But it’s a perfect example of what scientists do all the time: DOUBT. Don’t assume, test. The point of their criticism was to explain that evolution is not dogma and should not be used as such, and that the evaluation of the strength of evolutionary theory cannot be made by assuming it’s true, but by making real-world observations and assessing whether they fit the theory.

Why I am an atheist – Mike Huben » « Botanical Wednesday: a disquieting visage