I grew up in a family that, on my mother’s side, was rather strongly Scandinavian, and throughout my childhood, I vaguely sensed some strain between the various nationalities, a tension between the Norwegians and the Swedes (we had nothing to do with those Danes, and the Finns — completely beyond the pale). Now, at last, the stereotypes are illustrated for me in this strange webcomic, Scandinavia and the World. 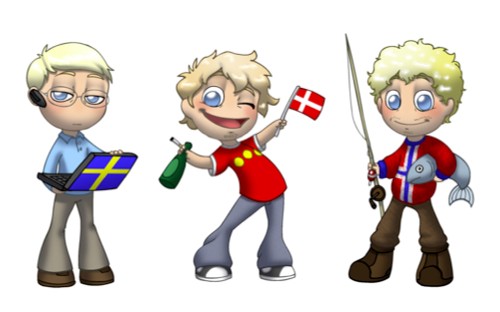 Basically, it’s about national stereotypes as seen from Denmark, with lots of explanatory comments and a fair amount of yaoi action. Iceland is sparkly and conceited. Finland is a semi-mute knife-wielding depressive in a Jayne hat. Germany lives in a funk of perpetual guilt. Denmark is laid back, constantly horny, a clueless racist, and phobic about nature, and has a beer bottle glued to one hand. Netherlands is much like Denmark — tolerant, easygoing, polymorphously perverse, and crazy about bicycles — but has a joint rather than a beer bottle. The Baltic States are like the Bronte Sisters on a really bad day. The United States is clueless, bullying, and wears Canada as a hat. And so forth.

I read a bunch of the strips tonight, and now I’m feeling like a traitor: I identified with the cartoon Finn the most.

Also, the one about the fish reminds me of Christmas.