There’s nothing wrong about being pretty, or sexy, or shopping, or being interested in traditionally girly things—but there is a big problem when that’s the only option you’re given. I know I’d be stressed if I were constantly told I’m less of a man if I’m not playing football or working in a manly occupation that involved large wrenches and heavy industrial tools, so I can sympathize with the limited choices given women: oh, you aren’t wearing a bikini on your lithe body with the large breasts? Then you’re an ugly dyke. You aren’t planning a career as a homemaker and mother? You just want to be a man.

So let’s socialize the little girls early, and start them on video games with good role models: slender women obsessed with clothes and boyfriends. 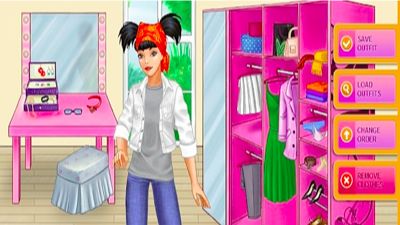 Read the description. It’s appallingly shallow. It makes me want to run out and buy John Madden’s football video game, so I can learn what it takes to be a True Man.

That’s one side of the problem: pressure to conform to a ridiculously narrow set of values. Here’s the other: the absence of support and recognition when you try to pursue other better, greater interests.

There’s just something wrong with our society. Women, get out there and fix it, OK?

Friday Cephalopod: Angry squid is watching you » « Stuff that annoyed me this morning