The Vision Forum is one of those backward organizations promoting a “biblical patriarchy” — they’re full of pious, patronizing claims about fathers raising daughters with good moral values, and it’s clearly all about tightly controlling women’s sexuality. A site called Rethinking Vision Forum is all about pointing out their hypocrisy and weirdness, and they have a recent post highlighting a biblical patriarchy CD. Take a look at the cover. 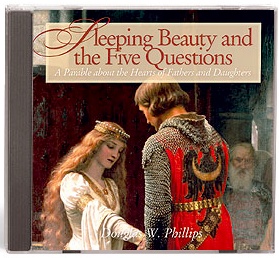 What is she doing? She’s reaching down to the man’s crotch; he’s looking down at what she’s doing; and creepiest of all, there’s a bearded older father figure watching sternly. And then, when you look at the original painting, you discover that it was intentionally photoshopped to put the woman into this suggestive position.

It’s supposed to be a “parable about the hearts of fathers and daughters”. I don’t think I want to know what the connection between the father-daughter relationship and voyeurism and public handjobs might be, but I suspect that no matter how twisted and kinky the interpretation, it’s probably got a biblical justification.

Our disgrace » « Why do women have orgasms?