Not again. Oh, no, not again. It’s more garbage from the Journal of Cosmology, with an article titled Sexual Consciousness: The Evolution of Breasts, Buttocks and the Big Brain. Hang on a moment before you click to rush over there, though. Here’s the abstract:

As first proposed and detailed by Joseph (1992a, 1993, 1996, 2000a,b), the evolution of human consciousness is directly related to the evolution of human female sexuality and full time sexual availability signaled by the evolution of a permanent enlargement of the female breasts and buttocks thereby mimicking the signs of estrus in other primates, and her ability to choose her sex partners. When females became fully bipedal the breasts expanded in size, mimicking the patterns of the buttocks, thereby signaling to males and females alike her sexual availability when walking on two legs and standing upright. Through sexual selection breasts and buttocks expanded in size and became the norm. Female sexual choice served to weed out the most brutal, frightening, and less intelligent males who were denied opportunities to breed, whereas continual sexuality receptivity motivated male possessiveness and a willingness to provide females and her offspring with meat and protection on a full-time basis; all of which led to and corresponded with the establishment of a semi-permanent home base heated by fire and the first hearths for the cooking of food which became easier to chew thereby allowing the jaw to decrease in size. Coupled with improved nutrition and female sexual preference for the more intelligent males who would provide for her, the cranium and the brain increased in size. Female sexual choice also contributed to the evolution of an enlarged male penis which could also be easily viewed when standing upright. The female pelvis also increased in size to accommodate the birth of big brained babies, and which resulted in a permanent enlargement of the female hips and buttocks. With the evolution of breasts, buttocks, the big brain, and human intelligence, sexual consciousness evolved, and human females began mirroring the signs of estrus in other primates by inventing and applying cosmetics and perfume to their bodies. Males were also becoming domesticated, civil society began to evolve, and modern human consciousness emerged–a direct consequence of the first sexual revolution and the liberation of female sexuality. This article is a review of the evidence and theories first proposed and published by Joseph.

Here’s an example of the level of sober science presented here.

The human female is the sexiest female on the planet, and she continually signals this fact as she has evolved an enlarged derriere and prominent breasts which remain swollen even when she is not pregnant, lactating, or sexually aroused. Those swollen breasts, and posterior protuberance, her buttocks, have been driving males wild with sexual desire for over half a million years.

This passage is followed immediately by some cheesecake of two nearly naked (one is wearing garter belt and stockings, admittedly) women posing next to a bright red car.

And there you have it, the totality of Joseph’s theory, which is his and he’s welcome to it: human women are really, really sexy — they are also multi-orgasmic and sexually insatiable — and this has driven the evolution of the big male brain, and also, our penises (“the human female is aroused by the sight of the male penis and the bigger the penis, the more aroused she becomes”). Unfortunately, he fails to present any evidence that intelligence is linked to sexiness, or even that human females are even sexier to human males than female rabbits are to male rabbits, or female cockroaches to male cockroaches. I mean, sure, you can make me drool by showing me pictures of lovely naked women, but so what? The scent of a female cat in heat has an even more dramatic effect on the local tomcats, but you don’t see them using tools and writing sonnets. 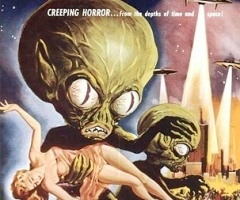 Maybe his thesis would have been better supported if he’d shown this data: that even alien monsters from another planet are driven mad with horniness at the sight of scantily clad Earth women. It’s no worse than any of the other ‘evidence’ he flashes at us for his hypothesis.

Maybe he needs to get together with James Watson to refine his ideas.

Haven’t they learned how bad science and bogus tradition is a tool of oppression? » « I’m back, and I’m still not a fascist