I find Irish winters to be an interesting and novel experience. I’m further north here than pretty much the entire United States, but thanks to oceanic currents, it never gets as cold as the winters of my homeland. That said, the cold is still very much a problem. To begin with, the housing is designed for the average climate. That means that there’s basically no insulation. Worse, because these apartments were built with gas boilers, there are vents to the outside in every room. Add in the apparently lazy installation of the windows, and the result is a very drafty apartment that does not hold heat for long. Its natural resting temperature seems to be around 50°F/10°C, when the outdoor temperature is around freezing, and it gets there quite quickly. More than that, it’s always very humid here, and that really makes a difference. Recently, we got about half an inch of snow, and it’s been just cold enough to keep most of it around. At the same time, the humidity has been hovering around 100%. That means that it’s been feeling about ten degrees colder than it actually is.

I took the cat out into the snow when it was falling, to see his reaction. Initially, he just hid in the bushes, but when I actually carried him to a salad station, he was willing to eat some grass. He was, however, not happy about the snowflakes falling on his delicate fur. 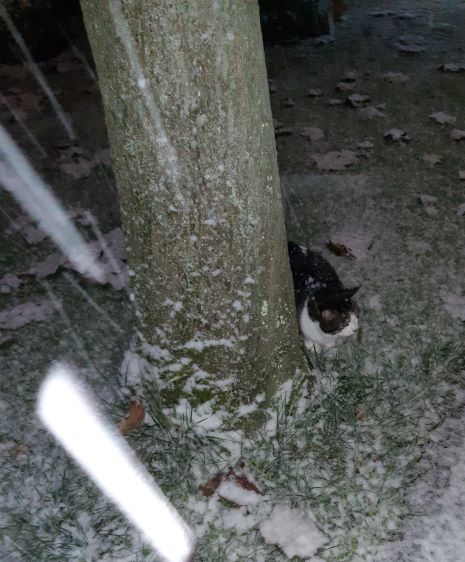 His holiness was not thrilled about the cold, wet stuff on his toebeans. He also did not appreciate things falling on his back. The salad was good, though. The image, for those who can’t see, is of a chubby British shorthair cat, partially hidden by a tree trunk. His fur is mostly dark, but he’s got white on his face, neck, and paws that’s as pure as the falling snow. He’s sitting on snowy grass, watching flakes fall.

After that, he actually was willing to play a little. I tried, and failed to get a video of him chasing snowballs, but it was extremely cute. Then, he chased one into a more brightly lit area, and his tiny brain was short-circuited by the combination of big flakes falling, and big shadows falling with them. He started randomly chasing everything at once until he reached a car, and retreated into the blessed darkness underneath it. 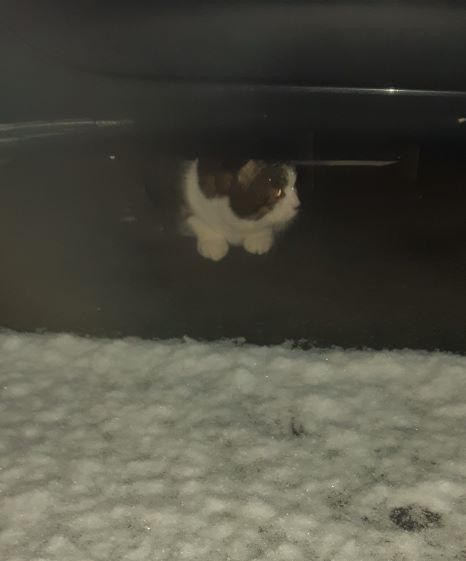 In this somewhat blurry photo, you can see His Holiness huddled under my neighbor’s car. His dark fur blends in with the background, but you can see the white on his muzzle, forehead, cheeks, and neck, and you can see his stubby white paws poking out. He’s looking to the side, and his eye is glowing a little from the camera flash. A couple cat pawprints are visible in the snowy foreground.

Eventually, I managed to coax him out from under the car, and we went back inside.

I’ve been maintaining a livable temperature by running a space heater in my little workroom, where I already spend most of my time. It’s cheaper than running the boiler to heat the whole flat, and thankfully the Irish government has been handing out electricity credits to help people get through the winter.

A couple days later, we awoke to find ourselves shrouded in fog, so I decided to see if I could get some evocative pictures during the cat’s salad run. I still need to get a new charger for my camera, and I find it hard capture the feel of a foggy day anyway, but I tried my best. It felt cold enough that the mist should have been freezing out of the air, but instead it hung around to make everything feel colder. 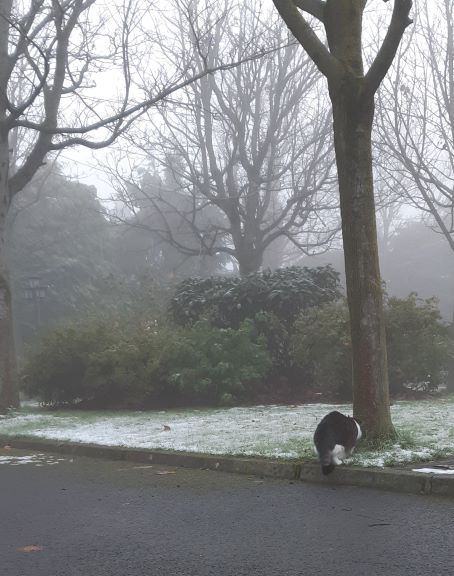 His Holiness made his usual first stop, giving me a chance to grab this picture. Fog seems to hold on to smells, so the air was full of slightly stale wood smoke, that seemed to be diffusing through the water droplets more than blowing from any definable source The bare branches of the maple trees stand out against the white fog that seems to have consumed the world outside our little oasis of reality.

This weather was much more acceptable to His sensibilities, but he still wasn’t thrilled about the cold, wet, white stuff on the ground, so when it came time to move on from the first grass patch, he was careful to walk where it was safe. 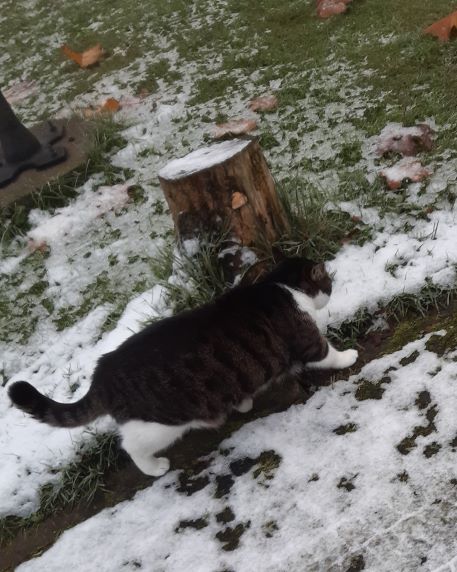 His Holiness has dark fur – brown-gray on the sides, with black stripes that thicken into the black that runs along his spine. His tail is similarly striped with a black tip. He’s a chunky cat, with thick fur that makes him look chunkier. His white legs seem stubbier than they are poking out from other the imposing bulk of his torso. In the picture, you can see that he’s walking along a curb where the snow has melted, forming a clear path through the treacherous white landscape. There was too much snow by that stump for him to graze there.

He followed that trail around to an area that had gotten a little more solar radiation, and stopped for a blessedly snow-free bit of roughage. 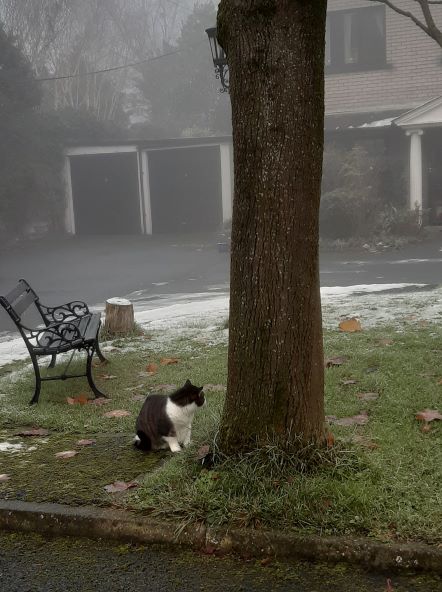 His Holiness is sitting on the corner of the paved walkway, looking back towards the mist-shrouded house. You can see the green grass fading smoothly into white snow behind him, contrasted with the tree trunk that fills the center of the picture.

Shortly after taking this picture, I decided it was time for both of us to go back inside to where it was warm.

For those of you who’re wondering about the title, it’s a reference to a very old newspaper comic called Pogo, about the lives of various anthropomorphic swamp critters somewhere in Georgia. I don’t need to go into too much detail, but Churchill “Churchy” LaFemme is a turtle with an interesting perspective on the transitive property of days:

If you want to help me feed His Holiness, that we might be spared his divine wrath, or you just want me to be able to do things like eat and have shelter, consider tossing me a little money at patreon.com/oceanoxia. It can be as little as a few cents a day, and for immigration reasons it’s my only form of income right now. See this as me passing around the hat at the end of a bit.

The BBC has warned you – the giant water lilies have no mercy. » « Video: History alla PragerU