As the name of my blog implies, I have some interest in the amount of dissolved oxygen in the ocean. It’s not a subject about which I have any particular expertise, it’s just something that can have a dramatic effect on aquatic ecosystems, and which relates to one of the possible long-term “nightmare scenarios” for global warming.

When it comes to the basic facts of climate change, there are a few things that are really quite straightforward, despite the overall complexity of the issue. The properties of CO2, as described by Foote in 1856 mean that an increase in CO2 levels in the atmosphere will cause an increase in global temperature. The only question is how much. Arrhenius answered that question in 1896 with a general calculation of how much affect a given change in CO2 would have on Earth’s overall temperature. So we know that increasing CO2 levels increases the planet’s temperature, and we know roughly how much we’ll get from a given increase. There’s uncertainty there, in part because of the complexity of Earth’s climate system. Amplifying feedback loops can increase greenhouse gas levels, and suppressing feedback loops might decrease them. But overall, if the atmospheric CO2 level goes up, the temperature must also rise.

Likewise, if the temperature rises, water will be able to hold less dissolved oxygen. This is also something we’ve known for a long time, although I’ve had more trouble tracking down the earliest research on it. The earliest references I’ve found were poorly cited, but in the 1940s. If anybody has more detail on that, I’ll welcome the addition!

We can start with dead zones. A dead zone is an area in a body of water in which the dissolved oxygen levels have gotten too low to support most multicellular life. There are a number of these, increasingly well publicized, around the world’s coasts. Most are caused by human activity. Not all of them exist year-round, but the effects of annual oxygen depletion outlast the depletion itself. These are typically caused by eutrophication (an increase in limiting nutrients) as a result of farm runoff flowing into the sea. The one that forms around the Mississippi delta every spring for this reason is probably the most famous one in the U.S. The influx of fertilizer causes an algae bloom, which can cause a brief increase in oxygen during the day, but then at night, respiring algae suck the air out of the room, so to speak. If they are able, fish will leave the area. If they can’t, either because of the size of it, or because they can’t tell which way to go, they will die. Less mobile animals tend to simply die.

It’s important to note that these dead zones are not caused by an increase in temperature, and the oxygen levels rise after the nutrient influx stops, and the algal bloom goes away. The decrease in oxygen due to rising temperatures may start showing in seasonal patterns, but it won’t be as dramatic. The network of currents throughout the planet’s oceanic system move water around too much to allow for a global state of anoxia at any point in the near future. As I wrote at the beginning of my blogging career, there are ways in which a majority of the ocean could end up as a dead zone. That scenario is one of the possible major factors in the biggest mass extinction in the geological record. Rising temperatures would contribute to that happening, of course, but they couldn’t cause it by themselves without first causing a dramatic change in global oceanic currents would be needed to stop mixing between layers of the ocean. 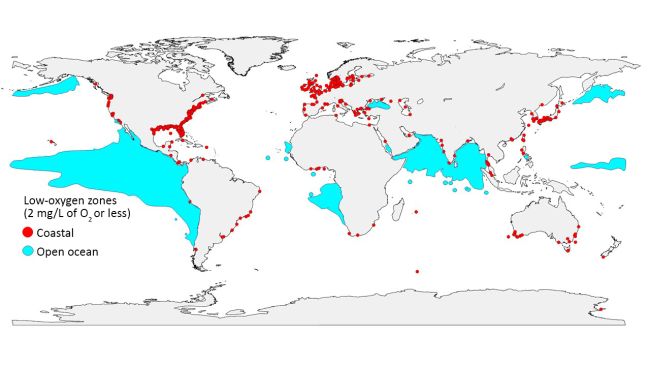 From Livescience article linked to the image: Low-oxygen zones are spreading around the globe. Red dots mark coastal locations where oxygen has plummeted to 2 milligrams per liter or less, and blue areas mark zones with the same low-oxygen levels in the open ocean. (Image credit: GO2NE working group. Data from World Ocean Atlas 2013 and provided by R. J. Diaz)

So what are we likely to see in our lifetimes?  The speed of warming has been increasing over the years, and that will continue until some time after we start treating climate change like the global emergency it is. Barring major changes in how fertilizers are used in agriculture, dead zones at river deltas will continue to be a thing, and are likely to get worse with higher temperatures.  The hypoxic zone in the equatorial Atlantic has given us a look at the first effects of decreasing oxygen:

An expanding zone of low oxygen, known as a hypoxic zone, in the Atlantic Ocean is encroaching upon these species’ preferred oxygen-abundant habitat, forcing them into shallower waters where they are more likely to be caught.

During the study, published recently in the journal Fisheries Oceanography, scientists tagged 79 sailfish and blue marlin with satellite tracking devices in the western North Atlantic, off south Florida and the Caribbean; and eastern tropical Atlantic, off the coast of West Africa. The pop off archival satellite tags monitored horizontal and vertical movement patterns. Researchers confirmed that billfish prefer oxygen rich waters closer to the surface and will actively avoid waters low in oxygen.

While these hypoxic zones occur naturally in many areas of the world’s tropical and equatorial oceans, scientists are concerned because these zones are expanding and occurring closer to the sea surface, and are expected to continue to grow as sea temperatures rise.

“The hypoxic zone off West Africa, which covers virtually all the equatorial waters in the Atlantic Ocean, is roughly the size of the continental United States, and it’s growing,” said Dr. Eric D. Prince, NOAA’s Fisheries Service research fishery biologist. “With the current cycle of climate change and accelerated global warming, we expect the size of this zone to increase, further reducing the available habitat for these fish.”

Less available habitat can lead to more fish being caught since the fish are concentrated near the surface. Higher catch rates from these areas may give the false appearance of more abundant fish stocks. The shrinking availability of habitat and resulting increases to catch rates are important factors for scientists to consider when doing population assessments.

This is probably going to be the primary effect we see in our lifetimes. Just as fish are shifting ranges and patterns due to temperature preferences, they’ll also move in response to changing oxygen levels, and to the activities of other fish. Combined with the ever-present threat of overfishing, this could lead to a number of fishery collapses in the near future, affecting the global food supply at the same time as our agricultural systems are struggling to adapt to changes in weather patterns and water availability.

Another interesting result of this is that the migration of fish away from hypoxic areas could actually accelerate the loss of oxygen and change the rate of ocean surface warming by decreasing the amount of water mixing due to sea life moving up and down the water column:

What’s more, their study found that the marine biosphere—the chain of sea life anchored by phytoplankton—invests around one percent (1 terawatt) of its chemical power fortune in mechanical energy, which is manifested in the swimming motions of hungry ocean swimmers ranging from whales and fish to shrimp and krill. Those swimming motions mix the water much as cream is stirred into coffee by swiping a spoon through it.

And the sum of all that phytoplankton-fueled stirring may equal climate control.

“By interpreting existing data in a different way, we have predicted theoretically that the amount of mixing caused by ocean swimmers is comparable to the deep ocean mixing caused by the wind blowing on the ocean surface and the effects of the tides,” Dewar said.

In fact, he explained, biosphere mixing appears to provide about one third the power required to bring the deep, cold waters of the world ocean to the surface, which in turn completes the ocean’s conveyor belt circulation critical to the global climate system.

Findings from the FSU-led study (“Does the marine biosphere mix the ocean?”) will appear in the forthcoming issue of the Journal of Marine Research, adding the role of major power broker to phytoplankton’s already impressive credentials.

Scientists for some time have known that the highly sensitive plants act as reliable signals of environmental changes at or near the ocean surface through sudden declines or rapid growth—and they have suspected that phytoplankton affect as well as reflect climate change when large, sustained plant populations gulp carbon dioxide from the atmosphere during grand-scale photosynthesis.

But along with the new calculations that point to the marine biosphere’s bigger-than-expected role in ocean mixing and climate control, Dewar and his colleagues also suggest that human and environmental decimation of whale and big fish populations may have had a measurable impact on the total biomixing occurring in the world’s oceans.

The biggest danger the oceanic ecosystem faces from warming water probably isn’t going to be a decrease in dissolved oxygen, but rather damage to the plankton that forms the base for most of the oceans’ food webs. That may be compounded by big fish like tuna being concentrated away from hypoxic zones, but the decline in available food would be a problem even without changes to oxygen levels.

The plankton decline will also probably give us an increased number of headlines about declining oxygen production from the oceans, as the article I linked indicates. That said, the bigger danger from that, in my estimation, is not that we’ll run of of oxygen to breathe, but that we’ll lose the ecosystem service of CO2 uptake provided by phytoplankton.

The global terraforming experiment we’re currently running is a bit mind-boggling, really. When we get over-the-top headlines, they’re sensationalist in focus, not in scale – concerns about running out of oxygen this century, or the scenario that gave birth to the title of this blog aren’t reasonable in our lifetimes, and for that I’m grateful. The reality, however, is just as dramatic, and while it’s hard to predict exactly how things will play out, I think it’s safe to say that it will continue to feel like we’re caught in a cycle of escalating chaos.

Repost: Geoengineering is dangerous, irresponsible, and unavoidable » « Watch this video by The Serfs.