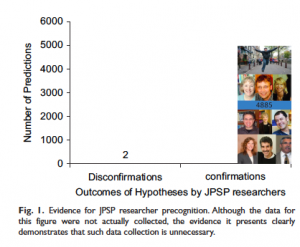 “Evidence for JPSP researcher precognition. Although the data for this figure were not actually collected, the evidence it presents clearly demonstrates that such data collection is unnecessary.”

As I finish up my quarter (three papers, one debate, one exam, and a very long packing list left!) I’m flipping through old papers. Here a few of the oddities:

Bayesian Bigot? Statistical Discrimination, Stereotypes, and Employer Decision Making
A serious paper, despite the odd title. In short, curious researchers decide to do a series of in-depth interviews to determine if employers are making rational decisions about who they should hire. In results surprising very few, people discriminate, but don’t do so as the result of updating based on experiences.

Actually, a picture is worth less than 45 words: Narratives produce more false memories than photographs do
Nice figure of speech ya got there. It’d be a shame if we were to…test it.

We Knew the Future All Along : Scientific Hypothesizing is Much More Accurate Than Other Forms of Precognition: A Satire in One Part
Some social psychologist gets annoyed at the publication of Bem’s precognition research, writes snark, gets it published in the same journal that published the ESP research. Also, uses charts like the one found in this post’s heading.

For example, biologists have excellent precognition but still not as good as psychologists (Fanelli, in press), political scientists appear to be guessing randomly (Tetlock, 2005), and economists are wrong about virtually everything (see Economics, all of it).  Psychology is number one!

The evidence for precognition is psychological science itself. Just open a random issue of any psychology journal. In it, you will find dozens of a priori hypotheses anticipating findings that eventually occurred.