So this morning I scrutinized a study by Hodson and Busseri that purports to show that the link between low cognitive ability and prejudice is moderated largely by political ideology; namely, that stupidity makes you conservative, and conservativism makes you racist. They conducted two experiments to test their model, and the results of their study supported the hypothesis. Hooray! More science with which to thrash conservatives, right?

Well, as you may have guessed from the title of this piece, the results of this study may be a bit deceptive. 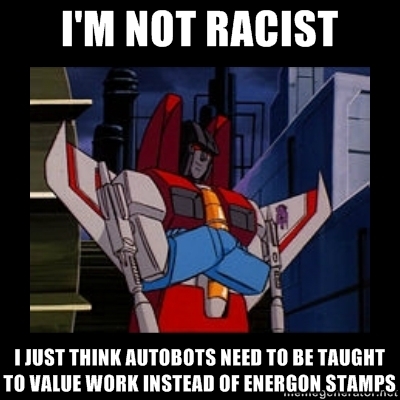 Okay, enough of that. Welllll… maybe just one more: 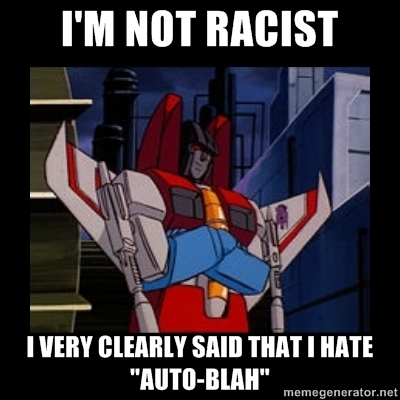 As much fun as it would be to simply say “case closed, conservatives are racist cuz ur dum”, it would be decidedly un-skeptical. There were a number of things that jumped out at me about this paper, and I’m going to try and detail where I think the authors over-step their conclusions.

So this one is several different kinds of perilous. The authors propose a mechanism between generalized intelligence (g) and prejudice. I have no idea how one would go about measuring generalized intelligence, since we don’t even have a good definition for the concept of what intelligence actually is. Colloquially, we can think of it as the ability to adapt to new tasks, but that’s not what they measure. In the cohort studies, they use the results for tests of verbal ability and the ability to see the similarities between symbols and shapes. While these definitely relate to certain kinds of cognitive processing, they certainly do not measure the kind of interpersonal aptitude that would be a determining factor in racism, or what they call “abstract reasoning”:

…adopting another person’s perspective requires advanced cognitive processing, abstraction, and interpretation, particularly when the target is an out-group member (and thus “different”).

They do not measure this at all. While the second study is a bit better, they make no effort whatsoever to demonstrate that the two methods of measuring g are in any way comparable. They just expect us to take it on their say-so that both methods are valid ways of measuring global cognitive ability. For the same reason I am suspicious of studies that “prove” that Africans aren’t as smart as Europeans, I am suspicious of studies that “prove” that conservativism is a product of lack of cognitive ability.

If you read my series on System Justification Theory (and you should, because it’s pretty fantastic), you’ll know that I view explicit racism as the product of giving in to implicit prejudices that everyone has to some degree. Measurement of overt racism is, therefore, a pretty bad way of measuring actual racist ideology. What it is good at measuring is beliefs in people who are not shy about being racist (often people who adhere to conservative beliefs). Unfortunately, this is precisely what the authors have done in the first study: they just straight-up ask people “hey, are you racist?”:

Attitudes toward racial out-groups were assessed in the NCDS and the BCS with the same five items (e.g., “I wouldn’t mind working with people from other races” and “I wouldn’t mind if a family of a different race moved next door”; αs = .82; Deary et al., 2008; Schoon et al., 2010).

With nakedly loaded items like that, you can pretty much guarantee that responses from liberals (even racist liberals) won’t reflect any outgroup hatred.

The second study is even worse. They ask respondents for similarly overt and loaded questions and then also ask how many gay people they know. This is essentially a trap to catch conservatives and exclude liberals who have “a gay friend”. Considering that it’s already pretty unlikely that gay people will be found associating in strongly conservative circles (both by reasons of exclusion and self-selection out), this study has no ability to control for the kind of double-counting that might run rampant through their findings.

Pro tip: measuring prejudice is hard. Make sure you do a good job before publishing a study like this.

Failing to control for environmental factors

So it’s an open question about whether or not the previous two criticisms meaningfully impact the results. After all, there is some face validity to the measurements of intelligence they used, and asking for overt racism will at least tap in to any subconscious racism a bit. It’s the trend that matters, not the numbers so much, right? However, there is a glaring omission in this study: the authors do absolutely nothing to control for social, geographical, or other environmental factors that may explain both conservativism and prejudice. For example, growing up surrounded by other people who share the same ideas will lead you to adopt them regardless of your intelligence. Throw in a low immigrant population or a lack of opportunities for upward social mobility, and you have the perfect recipe for both conservativism and prejudice.

Are these socio/environmental factors a moderating effect on the relationship between ideology and prejudice? We have no idea. The authors don’t include anything that we could use to measure that. Part of good science involves excluding other explanations for a given phenomenon. While the authors have done some of that, they have not done a thorough job. While I sympathize that they can’t control for everything, they don’t even mention this in their discussion (although, to their credit, they do head-fake in the direction of “social factors”). They push right past that caveat, however, to assert that this study is sufficient demonstration that “cognitive ability is a reliable predictor of prejudice”, which is not supported by their data.

Science is hard. If you’re going to stick your dick in a hornet’s nest, make sure you’ve got your shit covered first.

This study makes some very broad conclusions based on science that is not as strong as the authors wish it was. While I think there is merit to their hypothesis, and while I understand and appreciate their desire to see cognitive ability included in predictive models of prejudice, the paper on its own was bound to stir up controversy. In their failure to vouchsafe their findings by apportioning the strength of their conclusions to the strength of the evidence, they have exposed themselves to predictable and reasonable criticism and dismissal of their thesis.

CFI greases your palm » « Does stupidity make you racist?