This is part 3 of an ongoing discussion of a paper by Jost, Banaji and Nosek discussing System Justification Theory. Read Part 1. Read Part 2.

We left off last week looking at the ways that factoring in someone’s desire to approve of the way the world works (“I like things the way they are”) will lead her to defend the status quo, even if that status quo puts her at a disadvantage. The authors suggest 5 different mechanisms by which this effect might be seen: 1) rationalizing observed events by seeing the likely as the desirable; 2) using stereotypes to rationalize differences in power between groups; 3) using stereotypes more often when there is a cognitive ‘threat’ to the status quo; 4) accepting explanations regardless of their legitimacy; and 5) misremembering those explanations as being more legitimate than they are. When these factors work in parallel, we can explain much of the seemingly-idiosyncratic ways in which members of disadvantaged groups will sometimes defend the very system that holds them down.

In this installment, I will be delving into their discussion of what is one of the recurrent themes within my own analysis of racism: the fact that many of these mechanisms operate below the level of conscious awareness. Freud postulated the existence of three separate agents within the mind: the ego, the superego, and the id. His argument was that while conscious beings were able to be aware of their actions, many of the things that influence our behaviour happen without our even realizing it. While this idea has been around for decades and has a great deal of face validity, it is often ignored when we examine why people around us behave the way they do (another psychological concept called the Fundamental Attribution Error).

The authors of the paper suggest that, like many explanations for seemingly-irrational behaviour, the answer to the question of system justification may be found only by measuring ways in which people’s actions betray their subconscious thought processes. The question of favourability bias certainly came to mind: how can we be sure that favourable attitudes toward those on the higher side of power divides aren’t just evidence that minorities are just ‘nicer’? It might not be that there is genuine preference for those at the ‘top’, but rather that there is something about being on the ‘bottom’ that makes you less likely to criticize your betters. How could we measure that? This brings us to our next hypothesis:

Hypothesis 6: Members of low-status groups will exhibit outgroup favoritism even on (a) open-ended, nonreactive, qualitative measures, and (b) implicit, nonconscious cognitive, affective and behavioral measures.

Translation: We will still see support for those at the ‘top’ even after we control for “being nice”, because the process happens subconsciously

The authors cite a number of studies that support their hypothesis (as they do with all of them). One of the most compelling pieces of data they deputize into their argument comes from a fascinating study being conducted at Harvard called The Implicit Project. If you haven’t checked it out already, you really should. By time-stressing your cognitive processing, the study reveals subconscious bias – a bias that usually goes in favour of white faces and against black faces (for the record, I was one of the tiny minority that preferred black faces – I try not to read too much into that). The project demonstrates that, despite our incessant assertions that we “don’t see race”, our brains process that information with or without our permission to do so.

It’s not simply “noticing” race, however, that happens subconsciously. It leaks into our behaviours as well. The authors provide examples of an exercise in which all participants, regardless of race, demonstrated an increased willingness to work with white partners at a rate significantly greater than one would expect by chance. This flies in the face of the idea that people prefer to stick with ‘their own kind’, which is a popular meme of race dynamics. There appears to be more going on than simple racial adhesion. The effect is also seen in the male-child bias in things like naming and posting birth announcements – decisions that are (at least in most cases) agreed upon by both male and female parents in heterosexual couples. Perhaps the most frightening one was the example wherein police officers (both black and white) were more likely to fire upon African-American targets in training exercises than they were on white targets.

There is a corollary to this hypothesis:

Well let’s take a look, shall we? 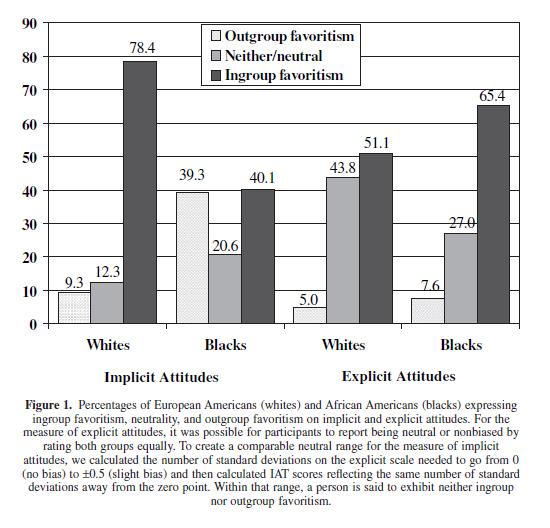 Data from a web-based project shows exactly the kind of effect that the authors propose in hypothesis 6′: despite similar patterns of explicit favouritism, we see quite a different story when we examine implicit attitudes. White participants demonstrate a preference for other whites, but black participants do as well. If simple ‘own-preference’ were the case, we’d see something quite different, with both groups tending to favour their own to the exclusion of the other. The fact that we see the observed pattern, not only in racial dynamics, but in terms of age (bias favouring young over old from both groups) and sexual orientation (bias favouring straight over gay from both groups), is strong support of the merit of the hypothesis.

The idea that implicit attitudes, unavailable to the person holding them, might influence behaviour is probably the most difficult part of understanding racism. Because we have conceptualized bigotry as a thing that bad people do because they’re bad, we fail to recognize the role that our societal narratives play in not only forming our ideas, but our actions as well. We can see from the above examples that despite what we may believe about ourselves, we have a tendency to act in ways that are contrary. Because of the (perhaps unseen) pressure to approve of/make excuses for the world we live in, the effect of our biases serves those at the top of our various power divides. Recognizing that can be a powerful method of negating the effects of privilege; failure to recognize that will ultimately lead to those divides continuing to grow.