Welcome Pharyngulites and Redditors! Thanks for reading! There is another part to this story that I’d appreciate you reading if you wouldn’t mind clicking through.

Black Nonbelievers of Atlanta is a non-crazy freethinkers group in Atlanta, and you should check them out.

One of my daily reads is Hemant Mehta’s blog, Friendly Atheist. This past week, he posted something that is well within my wheelhouse, and did so in a way that I think requires followup. The post itself concerns a black atheist public access show in Atlanta, Georgia which is in the southern United States. The hosts of the show devoted the first third of that particular episode to discussing homosexuality, in a way that embedded my face so firmly in my palm that I had to get it removed surgically before I could write this response.

Fair warning: the following video contains homophobic language, so if you’re particularly sensitive to bigotry you may not want to watch. It also contains considerable amounts of stupidity, so if you’re sensitive to that then you might want to… well quit using the internet I guess:

I am going to try and take these arguments as they come, so you can follow along if you like. The shit hits the fan at about 3:00 in:

No, it really isn’t. There are many homosexual groups that work within a religious framework, and try to change the religious organization from within. Successes in, for example, the Anglican church, are testament to the tireless effort of religious gay rights campaigners. The confluence of the gay community and the atheist community that does exist like has two sources. First, anti-gay attitudes lead many gay people to question whether or not the ideas put forth by religious leaders are true, which can lead to questions about the truth of any religious ideas, which can lead to atheism. Second, many atheists are skeptics and humanists. As a result, we look to science and reason as the foundations for our beliefs, rather than appeals to tradition. To claim that gay atheists aren’t really atheists is a claim made without evidence or logic supporting it, and can be dismissed as such.

5:52 – KD: …if you are of African descent, then you also accept the values, customs and traditions of traditional African people. 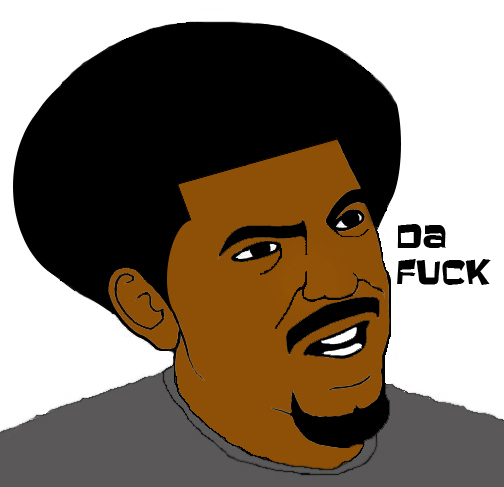 Yeah… no. Being of African descent doesn’t have anything to do with what ideas you believe, or what values you accept. First off, “traditional” African beliefs include religion, although not usually of the organized variety (rather beliefs that are embedded in culture and lived as part of lifestyle). Lack of belief in a god/gods is a rejection of “traditional” African values, customs and traditions, and yet the hosts still consider themselves black.

6:55 – KD: Homosexuality is a byproduct of Western individualism…

Black Son: So you’re saying it’s all about ‘me me me me’…

KD: Yes, it’s same sex relationships, it’s about having a relationship with yourself. That’s not complementary, that’s not balanced.

It was at this point that I felt as though a trillion pairs of eyes were all rolling at the same time. Black Son and KD have arrived at the home turf of every anti-gay bigot out there: homosexuality is a choice. KD, are you saying that the only reason you are attracted to women is because you recognize the importance of “complementary” relationships? Are you attracted to men, but have decided to to sleep with only women because you choose to be heterosexual? Or, have you always been attracted to women and haven’t felt the need to explain why? Because if it’s the latter case, congratulations – you have just illustrated that homosexuality is not a choice you ignorant motherfucker.

7:57 – Black Son: When I talk about God or the deity not making no sense, I come from a scientific point of view, so when you deal with science you’ve got to deal with it all the way, so when the topic of homosexuality comes up, I always bring up the Law of Reproduction.

Interesting fact to note here: there is no such thing as the Law of Reproduction. Black Son has simply wrapped his bigotry in a sciency-sounding phrase and then claimed the win. His argument is that the purpose of a relationship is to produce children. Homosexual sex does not yield children, and therefore homosexual relationships have no purpose. However, he’s not relying on science for this conclusion, he’s deputizing teleology. Teleology is not a scientific position, and it has no evidence to support it. Relationships provide a number of things to humans, children being only one of them. It is conceivable that Black Son has had, or would not object to another man having, a relationship with a woman that isn’t for the purpose of producing children. I doubt he’d get hot and bothered over someone who’s had a hysterectomy getting together with an infertile man. These relationships also violate his fictitious “Law of Reproduction”, and yet escape the criticism. It’s hypocrisy, nothing more.

Ah yes, if you’re gay and you’re black, you’re adopting a European custom. You’re not “really black”, because “real” black people make babies. Hey Black Son and KD, do you know how many black women are raped in the Congo and in South Africa each year at the hands of “African tradition”? Some of those women “reproduce” – are we saying that this is a custom that is acceptable to you, whereas consensual homosexual sex isn’t?

12:00 – KD: European customs are by nature contradictory or in conflict with African customs

This is a load of horseshit. Customs are not inherently geographical – they are historical. The value of those customs is not based on where or when they came from, but rather what effect they have on human beings. The formalization of the scientific method (which these guys claim to adhere to, despite all evidence to the contrary) came out of… drumroll please… Europe. Does that mean that African people can’t use science? Does it mean that white people don’t value community and family? Absolutely not, and you’d have to be an idiot to think otherwise.

Oh… well, I guess that answers that question.

13:28 – KD: …in that sense they’re not necessarily colonizing each other because they’re cousins. So if Egyptians go to war with people in Ethiopia, that’s not colonialism. That’s one nation calling another nation to get their affairs in order before the Europeans or the Arabs control both of them.

WHAT? At this point we can safely conclude that KD is just making stuff up as he goes along. He’s pretending that pre-colonial African civilzations lived in peace and harmony, only using war as a means of warning each other that external invaders were approaching (it seems like a strongly-worded letter would suffice for this purpose). He also seems to think that European and Arab people are not cousins to African people, once again flying in the face of science.

After the 16-minute mark they veer off into discussions of black nationalism, which is not relevant to this discussion.

I liken watching this clip to taking a bite of a blueberry muffin, except instead of blueberries, it’s got facts sprinkled in there, and instead of dough, the muffin is made of bullshit. KD and Black Son touch on some things that are absolutely true: African social customs are distinct from European because of separate histories; colonialism introduced many European ideas into the African narrative; many gay black people initially leave the church because of the hatred they experience. However, the hosts then link these facts to conclusions that are in no way supported by either evidence or reason – simply backfilling an explanation for their own hatred of gay people.

I have known black pseudo-intellectuals of this stripe before. They engage in the exact same kind of flawed reasoning that religious people do, and couch it in rejecting “European” values. If I was an atheist in Atlanta, I’d be downright embarassed to have these two clowns representing me, and I hope they catch a shitstorm for being that publicly moronic.

Please remember to read the follow-up to this story!

In defense of my bigoted moron brothers » « Normalizing belief