There is a great scene in one of my favourite movies where a black TV executive assembles a writing team for his new black-themed TV show, and expresses his baffled dismay at the fact that they are all white. To try and explain the phenomenon away, the writers sitting around the table offer a variety of suggestions: maybe they couldn’t find anyone qualified; maybe black writers didn’t want to work on the show; the executive sardonically suggests that maybe they couldn’t put their crack pipes down long enough to fill out the application.

Of course there is a real answer to why there weren’t any black writers around the table: the people that make the decisions on who gets hired picked a group of white people. It’s not a mystery, it happens all the time. For reasons that are (likely) completely unconscious to the powers that be, the black writers who applied just didn’t “seem right” for the position, so they didn’t get hired. Aren’t we lucky that this kind of thing only happens in movies, right?

While it is my usual practice to post an excerpt from the articles I link to these stories I am sadly unable to do justice to what’s contained in the link. I will, however, provide you this screengrab: 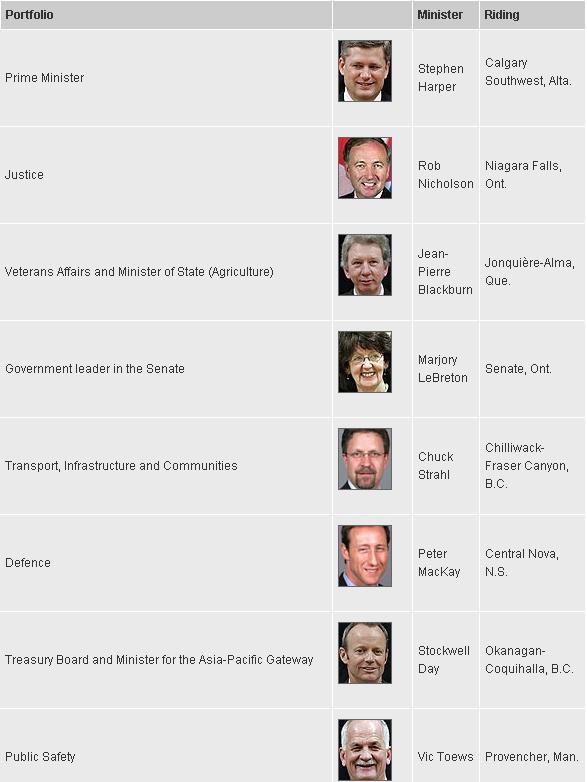 Do you see what I see? Go to the link, scroll down the list, and see if you can spot what I’m talking about. Yes, it’s a sea of white faces. White, male faces actually.

Now I feel the need to back up here and clarify a lot of things.

This is not a commentary on this cabinet. Please rest assured that while I have strong political disagreements with the Conservative party, I am not interested in smearing them with as ugly and ham-fisted an approach as “they is a bunch of racists”.

This is a commentary on all cabinets, at all times. This is a commentary on the cultural zeitgeist (I am sorry, I cannot avoid using the word) that surreptitiously pushes out PoCs. Aside from Bev Oda and Leona Aglukkaq (and possibly John Duncan, although I don’t think so), the cabinet is made up of white faces. This is not in any way unusual, although it probably should raise some eyebrows that the minister for the Asia-Pacific Gateway, the minister for Citizenship, Immigration and Multiculturalism, and the minister for Indian Affairs (I think) are all white faces. To be sure, International Co-operation and Health are not rinky-dink positions and there are two prominent female PoCs in those ministries, but the preponderance of positions are monochromatic.

As I’ve said countless times, this is how we can tell that we have not reached anything that even resembles the post-racial utopia that many of us (liberals and conservatives alike) would like to pretend Canada is currently. Instead what we have is tokenism and rampant under-representation by one group, with an accompanying over-representation by the group that just happens to be the one with the most political clout historically. This is no accident, although I am doubtful it happens on purpose. It is for this reason that I roll my eyes whenever someone talks about “personal responsibility” being the answer to racial disparity – so much of it happens below a level where we are aware of it. As a result, we get more of the same thing, by a process that looks quite accidental.

This is no accident.