As you’ll see this week, I am at times very lucky to have a handful of countries, without whom my job would be a lot more difficult and would require me to actually WORK to produce material, rather than just commenting on stories in the news.

But, luckily for me, Iran is still going strong:

The imposition of headscarves is deeply resented by more liberal-minded women. Now the government is tightening up on men’s hair as well. The Ministry of Culture and Islamic Guidance has published a guide to men’s hairstyles. Short, neat hair is approved; ponytails are definitely not. 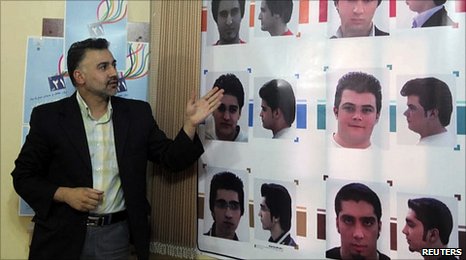 You’ve got to hand it to religious authorities: they are consistent in their stupidity. After passing laws essentially requiring women to dress like the Paper Bag Princess, they decided that strictly controlling only half of their population wasn’t quite enough. After all, as everyone knows, haircuts lead to talking, talking leads to dancing, dancing leads to touching, and touching leads to earthquakes.

I am reminded of a fantastic ditty from the musical Hair:

The bizarre twist of this whole thing is that this abject moronity is not coming from the government:

Strangely, it is the hardline President Mahmoud Ahmadinejad who has been arguing that it is not the government’s job to crack down on people’s style of dress. For this he has been criticised by various conservative ayatollahs and politicians, who thunder against “naked’ or “half-naked” women roaming the streets. Their version of naked usually means a headscarf slightly out of place.

I lived in Toronto around the time that a law was passed permitting women to be topless at beaches. We could have had literally half-naked women roaming the streets. Do you know what happened? You guessed it – not a hell of a lot. Some women went topless, most didn’t. Now and then when you go to the beach, you might spot an uncovered boob… no big deal. Strangely enough, like prohibition of alcohol, the more illicit and forbidden you make sex, the more alluring it becomes. Iran is spiralling into itself in its own obsession with sex.

I’ve written before about religion’s strange sexual fetish. Sex is part of the human experience – it’s a thing that we do. We are fortunate enough to be smart enough that we can have sex essentially whenever we want, and if we take the proper precautions it can be virtually risk-free. Provided that both parties (or all of the parties… whatever lifts your luggage) are consenting (and capable of consent, obviously) then we should feel free to boink the night away. Religion doesn’t like that – it wants control over every aspect of our lives: our thoughts, our actions, and even our most private moments with those we love (or those we’ll love until the sun comes up). At least the religious authorities in Iran aren’t simply picking on the women anymore. That’s equality!