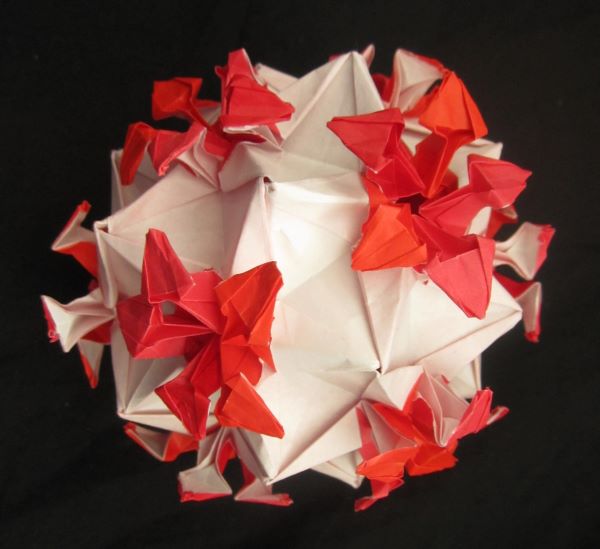 Coronavirus, an original design by me

Let me tell a story.  Although I’ve continued posting monthly origami photos, I’ve made very little origami in the past year.  I just have a really large backlog of photos (all on my Flickr, if you can find it).  Although being stuck at home all the time doesn’t seem like it would interfere with origami (and indeed, I was already stuck at home in previous years due to unemployment), there was more of a psychological shift, as I felt less motivated to pursue certain interests.

Perhaps it didn’t help that I got one particular idea in my head, which is that I would make an origami coronavirus.  Some people are really impressed when I say that I design my own origami sometimes.  Being impressed is right, it is in fact quite difficult.  I created a bunch of prototypes based on completely different fundamentals, and I was never quite satisfied with any of them.  And these prototypes just sat in a box next to my desk for long periods of time, because having to figure this one out wasn’t especially enticing.

Eventually I revisited it, and after several more failed ideas, went for something simple.  I took a Passiflora unit (by Ekaterina Lukasheva), I just… squished some flaps into triangular shapes.  I was specifically thinking of the coronavirus graphic created by the CDC, where the virus is depicted with triangular spike proteins. 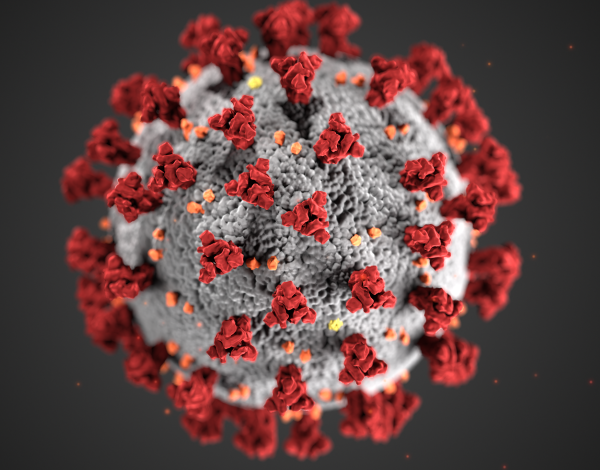 It’s very simple, but at the same time way too complex.  To make the triangles equilateral, I used a bunch of algebra to calculate a particular fold, and then the reference finder to approximate it.  And it probably doesn’t even matter, because it’s limited by my own precision rather than the math.  I also found, as I started putting pieces together, that they didn’t quite fit, and some of the flaps need to be bent out of the way so as not to intersect each other.

It’s messy, and I’m a bit dissatisfied with it.  But I’ll give myself a break.  It doesn’t fall apart, and it looks good, what more could I want?  I showed it to my husband, and he figured out what it was without me telling him.  “Aww, cute”, he said.  It’s hard to be mad at an inanimate object.

I made some folding diagrams, if anyone wants to give it a shot.  Just ask.  It’s middling difficulty, for a 30-unit model.  Or, you could also check out this model, which comes with an instructional video.