This is a monthly feature wherein I show off my origami skills, mourn my photography skills, and talk about math.  I primarily do modular origami. 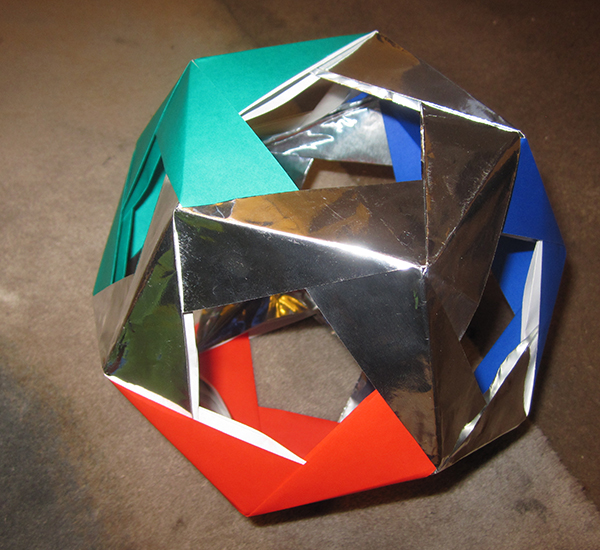 A dodecahedron made of 108 degree modules, apparently invented independently by Robert Neale and Lewis Simon.

I think this is a fairly simple model, since it comes from Beginner’s Book of Modular Origami Polyhedra. But once I tried to teach it to kids, and it’s not a great model to teach to kids, trust me.

What is modular origami?  I take many squares of paper, and I fold each of them into a module, aka a unit.  Usually, the modules are all identical.  Then I assemble all the units into a model, usually based on geometrical shapes.  Traditionally, no glue or scissors are used in assembly.

The geometrical shape here is a dodecahedron.  A dodecahedron is a platonic solid with 12 pentagonal faces, 30 edges, and 20 vertices.  Each unit corresponds to an edge, and so there are 30 units.

Since these are regular pentagons, each unit has to have 108 degree corners.  Of course, if you actually do the math, you find that the corners are closer to 108.435 degrees.  This is okay, because origami space is non-euclidean, kind of like R’lyeh.

Some stuff that you can’t tell from the photo: this thing is a monster.  It’s 7 in (18 cm) in diameter.  I used 5 green squares, 5 blue squares, 5 red squares, and 15 squares of silver foil.  The symmetric arrangement of these colors is left up to the imagination, since I certainly don’t have the photographic skill to capture it.

Everything is my football » « Student groups and volume