I recently posted about how cartoons depend so much on shared knowledge for their humor. But the increasingly fragmented nature of our information sources means that we can no longer take anything for granted. I recall a colleague of mine who had been teaching English for a long time saying that he could no longer depend upon his students having a shared background anymore that he could build upon. One positive reason for this lack of commonality is that the student bodies are now more diverse and the different backgrounds can add richness to the classroom experience.

But it is not only professors who have such problems. I recall some international students telling me that very often the professor would tell a joke in class and the other students would laugh but they had no idea what was so funny. But they would laugh politely, just so as not to draw attention to themselves.

This lack of a common experience happens more frequently when one is talking to people of different generations or from different cultural backgrounds but not exclusively so. Much of our conversations with others also depend on it, and even when we think something is so well known that it can be taken for granted, you can still be surprised. Recently I was chatting with some old friends of my own generation who are also from Sri Lanka about how people here sometimes found our names hard to pronounce. Chinese students, for example, sometimes use an Americanized name just to avoid the endless hassle to trying to teach people how to say their actual names.

In the course of the discussion, I mentioned how I read someone saying that in cafes and other places where you have to give a name so that they can call you when your order is ready, he gives the name Spartacus so that he can stand up and shout out in response “I am Spartacus!” I thought that was funny. My friends smiled but I could see that they were a little baffled by my allusion and, upon questioning, I found that they were not aware of that famous scene from that famous film Spartacus. (I linked to it a few months ago.) I assumed that everyone knew it, especially those of my generation. But they did not.

Giving a simple name at such places may not always solve the problem either. 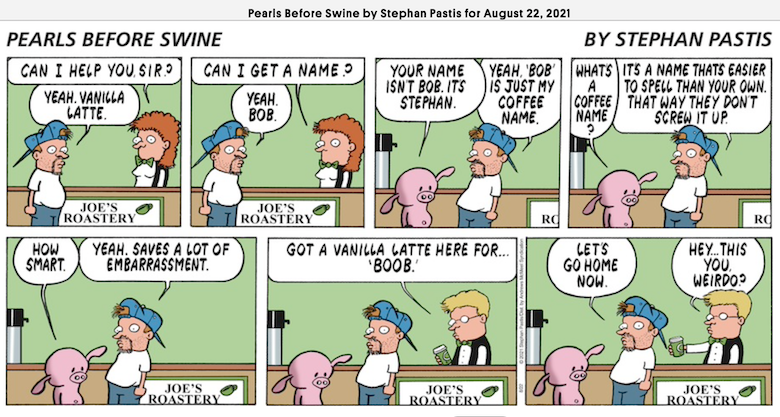