It is clear that the floodgates have opened with story after story coming out about Donald Trump kissing, groping, and assaulting women. The latest outpouring seems to have been triggered by the debate on Sunday where Trump was pressed by moderator Anderson Cooper on whether the things he said on the infamous tape were just words or whether he had actually done them. After evading the question twice, on the third attempt, he denied the actions.

That denial seems to have prompted angered women to come forward and say that he had indeed done those things. I tried keeping track of all the charges but it was too much. The latest accusation today is pretty gross. Even Matt Taibbi, in his account of the fiasco that was Paul Ryan’s event in Wisconsin, can’t cope.

Keeping up with Trump revelations is exhausting. By late October, he’ll be caught whacking it outside a nunnery. There are not many places left for this thing to go that don’t involve kids or cannibalism. We wait, miserably, for the dong shot.

We are now in Bill Cosby territory where the allegations by the women are so many and so vivid that even if it turns out that one or two women’s recollections were faulty or even false, it will not matter. Here is a timeline of the allegations but it is two days old and already out of date.

The piling on continues with five biographers of Trump saying that based on their knowledge of him, they were not surprised by the charges and that the rest of America is only now getting to know the person that they have known over the past four decades. They expect him to get even more racist and extreme as the campaign heads into the final stretch.

D’Antonio: Well, I think that what Tim is saying is consistent with the guy who would decide to have this campaign in the first place. You know, who would proceed knowing that he has all of these problems in his background, knowing how much audio and video exists, having been on “Howard Stern” and said horrible things? He just doesn’t seem to recognize his own issues and problems and how he’s perceived. So maybe for the next three weeks, he’s going to be trying out, you know, Breitbart TV and proving to the masses that follow him that he’s as red in tooth and claw as he seems to be. And, as Tim said, he’s already laid the groundwork to declare it was rigged in the first place.

A former executive in his organization who worked for him for 18 years as executive vice president and senior vice president of his company, says that her “longtime boss is dangerously unsuited in every meaningful way to serve as president of the United States” and that “He flies off the handle, he attacks viciously — it’s like shooting someone and having a nuclear bomb come back at you. He’s vindictive, and he’s dishonest.”

This is the image of Trump’s America that is emerging. 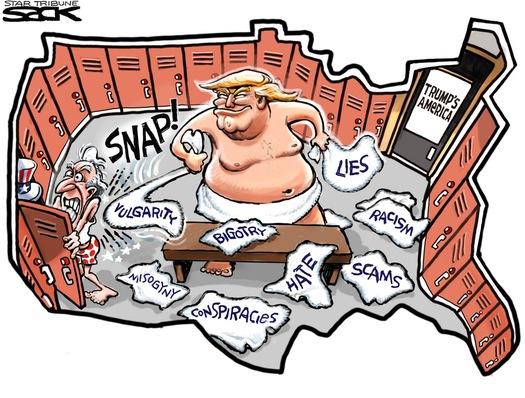