I have written before about how Sri Lanka has had women heads of state since 1960 and women have occupied high positions in government, academia, and business for a long time. This does not mean that they are treated equally in all spheres (they still tend to be expected to be the primary homemakers, child rearers, and care givers irrespective of their positions and responsibilities outside the home) but it does mean that one did not see obvious signs of women being restricted.

One would see women dressing pretty much as they wanted, especially in the cities where the latest western fashions were common, and men and women could mix quite freely in public. There would be occasional outbursts by some conservative religious person about ‘immoral’ dress and behavior by women but they were the same kinds of cranks one gets in the US and were generally ignored.

But there was still sexual repression. Public displays of affection were highly frowned upon and dating was not allowed, though casual encounters at bus stands, social events, group gatherings, and the like were permitted. Hence many ‘casual’ encounters were carefully planned and executed with the precision of the Normandy landing.

But there are signs of regression. Although Muslims make up about 6% of the population, one never saw women wearing any of the forms of covering that the strict rules of that religion required. When I was a youth, you could not tell who was a Muslim student on college campuses and who wasn’t and I could talk freely with the sisters of my Muslim classmates. Some older Muslim women might, instead of draping the top of the sari over their shoulder, drape it over their heads but that was about it. But on recent visits to Sri Lanka I have seen quite a few women dressed in the full covering, and even saw some students dressed like that on university campuses, which was quite shocking to me.

Now comes a story about a Catholic boy’s school in Colombo instituting a dress code for all women entering the school premises and putting up a poster at the entrance depicting what is allowed and what is forbidden when mothers come to drop off or pick up their sons. (Most schools in the towns are single gender and k-12.) 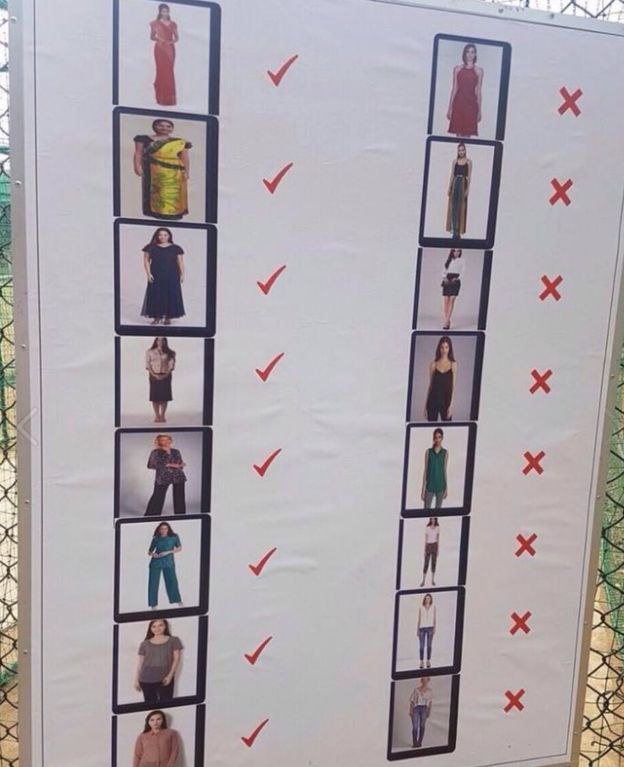 Observers have taken this as a further sign of regression in a country that had some claim to being somewhat progressive at least when it came to gender roles and have taken to social media to voice their concerns.

Many of the responses to the poster were of outrage. “Well done…We are now properly regressing,” read one comment, while someone else suggested that all the female staff and mothers of students turn up in “male national sarong dress or swimwear” in protest.

Some parents noted that many other schools, including “international schools”, were also in the habit of turning away women in sleeveless clothes despite not having put up posters about it.

Others commented on the irony of forbidding strappy tops and sleeveless clothing when the sari – right on top of the “approved” set of clothing – traditionally showed off a woman’s midriff.

“So no jeans? No tights? No sleeveless? But midriff bearing saree is okay. Not that it matters that it’s midriff bearing. But who gets to decide that arms are more offensive? Or that pants are better than jeans? Also, do they realize we live in a tropical country? Moreover, where is the board for dads?” wrote Vraie Cally in a Facebook post.

One hopes that the backlash and ridicule that the schools are getting will result in them reversing the rules. But this is still a disturbing sign of regression.