Athletes playing for teams are expected to wear uniforms and those playing in individual sports have some restrictions too. But what is astonishing in this day and age is when those requirements are aimed at exploiting women’s sexuality. The most notorious were the rules for beach volleyball that at one time required women to wear skimpy bikinis.

I have not watched professional tennis for sometime. Wimbledon is currently going on and though the tournament dress code is quite reasonable, those women who have Nike contracts were provided this year with dresses that seemed to resemble baby-doll night dresses with side splits that are not as functional as players would like since they swished around, and many women were not pleased. 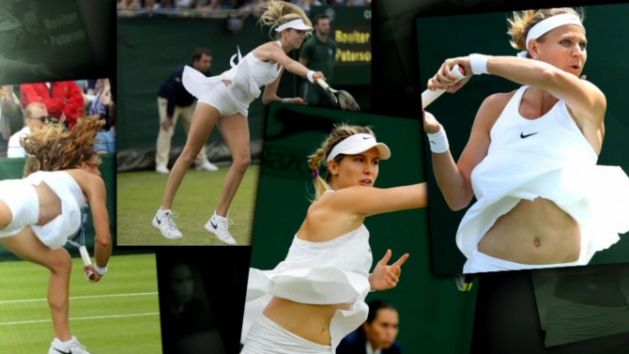 Nike then made some modifications since some players were making ad hoc adjustments.

The controversial breakout star of Wimbledon this year has turned out to be the NikeCourt Premier Slam Dress — a short, swingy, babydoll-like piece of attire that has created a storm on the court. At issue is both its questionable practicality and, gasp, its potential to flutter in a revealing manner.

Writing in The New York Times Tuesday, Ben Rothenberg explained that when Nike issued the dress to the female players who represent the brand, it immediately garnered mixed reviews. The company had promised “power pleats and racerback construction, which work in tandem to enable the athlete’s movement” but players instead found, as Sweden’s Rebecca Peterson said, “It was flying everywhere.” Players quickly improvised their own hacks, with Katie Boulter turning a headband into breeze taming belt, and Lucie Hradecka donning leggings underneath the dress, and Nike made some alterations to the side slits. The Times says that when Nike offered its players a more traditional ensemble, “There were several takers.” But others approved of the dress — Maria Sakkari told The Times, “I think it’s a very pretty dress, and I think that it’s very feminine.”