The hot news in presidential elections this week has been the rise in the polls of Bernie Sanders that has seriously challenged Hillary Clinton’s air of inevitability as the eventual Democratic nominee. Her past policy positions, some of which like her warmongering and pro-Wall Street and pro-oligarchy stances, are distasteful to the more activist and progressive members of the Democratic party. These people are rallying around Sanders and the movement has been such that even the pundit class, many of whom were ignoring the Democratic race because it seemed like she was a shoo-in, are now sitting up and taking notice.

Her main argument has been that she will win against any Republican while Bernie Sanders will lose, and the feeling that she will be the inevitable nominee so why waste your vote on a loser. Those two pillars of her campaign have become undermined by recent polls.

As of today, Clinton or Sanders would both beat either Donald Trump or Ted Cruz. Sanders’s’ poll numbers have also been surging in Iowa, the state with the first caucus on Monday, February 1, and in New Hampshire, where the first primary takes place on Tuesday, February 9.

Take for example, this chart about the situation in Iowa. 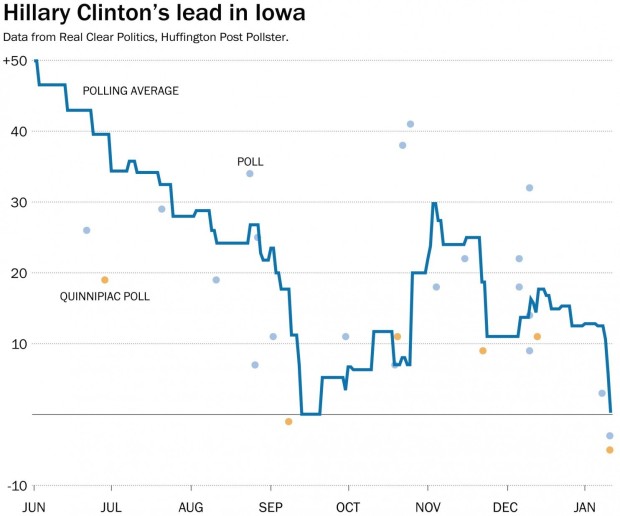 What should be disturbing to her is that young people, especially young women are flocking to Sanders, overturning the myth that Sanders’s support mainly comes from misogynistic white men.

For all the attention this band of unpleasant men with mommy issues attracts, you might assume they’re core to Sanders’ support among young progressives. But a new poll from Rock the Vote is turning that conventional wisdom on its head. Yes, there’s a big gender gap among young voters backing Bernie Sanders. But it’s not among men. Voting-age women under the age of 35 now favor Sanders by 20 percentage points over Clinton. You read that right: Young female voters support Bernie Sanders by an expansive margin.

The poll, published Monday in USA Today, was conducted among more than 1,000 young adults by the polling firm Ipsos. Sanders leads broadly among voting-age millennial Democrats and Independents: 46 percent to 35 percent for Clinton. But Sanders’ advantage among young, voting-age men — a modest 4 percentage points — is barely outside the margin of error. Far from being a drag on on Clinton’s candidacy, this poll suggests, young men are the demographic keeping her in the hunt among millennials.

Progressive groups like MoveOn have endorsed him by a massive margin. For a full list of the people and groups that have endorsed Sanders, and it is quite impressive, see here.

Planned Parenthood has endorsed Clinton but I can understand that as a strategic move. That organization is fighting a rearguard battle for survival against relentless attacks by Republicans. It, more than many other groups, needs a Democratic president to have its back. It probably felt that it needed to back what it felt as the presumptive winner, knowing that Sanders would still vigorously support them even if their gamble failed and he won.

In 2008 too Clinton was the presumptive favorite to win but her surprisingly bad third place finish in Iowa seriously dented her aura of being destined to win and although she edged out Barack Obama in New Hampshire, she ended up losing the race. She clearly does not want to lose in Iowa or New Hampshire this time and has started hitting Sanders hard at what she considers his weakest point, gun control, but also charging that his plans to curb Wall Street and his health care proposals are seriously flawed.

Clinton charged that Sanders’s policy proposals were unrealistic, that the Vermont senator would raise taxes on middle-class families and that he could not be trusted to fight special interests and protect President Obama’s achievements, including his signature health-care law.

On health care, she argued that Sanders’s “Medicare-for-all” plan would jeopardize the Affordable Care Act and effectively turn over health coverage programs to the states, many of them led by Republican governors.

Her charges about Sanders’ health care plan are false. His ‘Medicare for All’ would be a federal plan and states would not be able to eliminate coverage. It would replace Obamacare, which is a cumbersome plan anyway and deserves to be replaced with something better. [UPDATE: Zaid Jilani writes that her new policy opposing single payer health plans can be traced to the huge amounts of money she has received from the health industry.]

The idea that she can be trusted more than Sanders to fight special interests is laughable on its face. As for the claim that Sanders would raise taxes on the ‘middle class’, since she thinks that even people earning up to $250,000 are middle class, that shows just how out of touch she is with ordinary people, since the median household income is around $53,000.

Sanders says that Clinton’s recent and misleading attacks on him are signs that she is in serious trouble.

Sanders gained a lot of respect for his refusal to exploit those issues that Republicans are dwelling on against her, like Clinton’s email problem and her husband Bill’s sexual history, and his quick apology and action when some on his campaign staff gained unauthorized access to Clinton supporters’ data.

It is perfectly fair and indeed desirable for candidates to point out their differences in their policies with their rivals within their parties and with the opposing parties. That is what election campaigns should be all about. But Clinton needs to be careful that her attacks on Sanders are not seen as unfair. That could backfire because he is widely seen as a decent and ethical man,