Most reasonable people know that the so-called war on Christmas treat is a joke and make fun on it. But Joshua Holland writes about the history of this idea, that it has dark roots in the early twentieth century that then went dormant until Fox News reintroduced it and mainstreamed it.

Now, the war on Christmas wasn’t always a joke. According to journalist Daniel Denvir, it was first created by anti-Semites in the 1920s as a way of attacking what they saw as an international Jewish conspiracy. Then it was briefly brought back to life in the mid-1950s by the far-right John Birch Society, which posited that the United Nations was targeting Christmas to advance the cause of global communism.

It then lay dormant until around 2004, when Bill O’Reilly, Sean Hannity and a handful of Christian conservatives created the war on Christmas that we know today. They spun corporate America’s profit-driven tendency to wish consumers an inclusive “happy holidays” into a plot by godless liberals to banish Christianity from our holy shopping malls.

Oddly enough, these efforts have had the opposite effect of what the Christian conservative warriors intended.

And the irony is that ordinary people who wouldn’t think twice about offering a cheery “merry Christmas” just a few years ago are now hesitant to do so for fear of offending people who would never have even thought to take offense.
…

When she was asked why one of their Christmas-themed drink specials had been renamed, a bored looking bartender in a Black Sabbath t-shirt gave a shrug and said, “political correctness, I guess.” This followed a well-meaning clerk at a local grocery store asking me what holiday I celebrated so she could offer me the appropriate salutation.

So mission accomplished, religious conservatives. You’ve successfully politicized a benign holiday greeting that secular humanists and atheists and Jews and Muslims and Zoroastrians used to happily exchange without a second thought. You got your war on Christmas. Now have a happy damn holiday. 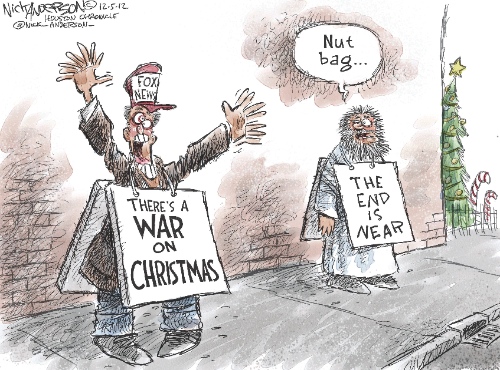 Balmy weather in the northeast US » « Gender-based insults in politics