One of the perennial puzzles that political observers in the US have struggled to understand is how it can be that a political party like the Republicans that is so nakedly supportive of the interests of the plutocracy manages to win so many elections. The Republicans consistently advance policies that are harmful to practically everyone except the very wealthy and yet they currently have majorities in the US Senate, House of Representatives, governorships, and state legislatures.

One explanation is that ordinary people have been bamboozled into thinking that the GRAGGS issue (guns, race, abortion, gays, god, and sex) are the most important even though all of them have barely any tangible effect on their everyday lives, unlike issues of income inequality, health care, education, social security, infrastructure, and social services.

No doubt this is a factor. But more recently a more nuanced analysis has emerged that says that in addition to those factors, the problem is not that people at the lower end of the economic spectrum vote for Republicans and thus against their own interests but that they tend to not vote at all in larger numbers, as this graphic by Ezra Klein suggests, leaving the upper income groups to disproportionately dominate elections. 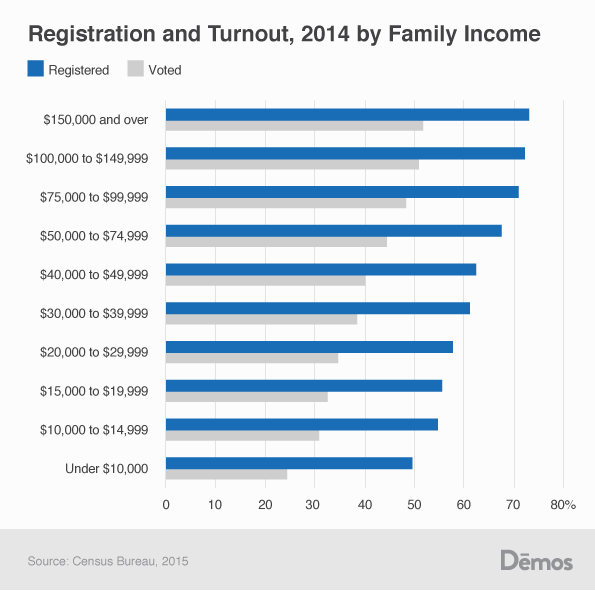 Similarly, those who think that government should increase services and spending on the poor, and reduce inequality are the ones less likely to vote. 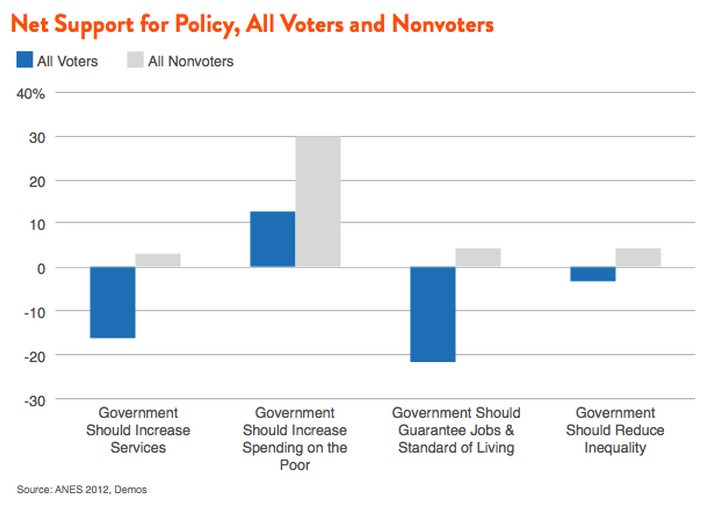 Why don’t the lower income groups vote? Part of the reason is that the Democrats in their neo-liberal phase have also sold lower-income people a bill of goods and made them disenchanted with the whole political process, leading to a level of cynicism that causes them to think that voting does not matter. Another part of the problem are the deliberate attempts to make registering to vote and actual voting harder so as to drive down turnout among lower income groups.

But there still remains the question becomes why the people who are in the middle and upper end of the income spectrum vote for a party that will harm the ones at the lower end and to a lesser extent even themselves. Here things get more tricky to understand. It seems like the idea of the lower income classes being moochers and looters, taking advantage of the hard work of others, has become entrenched. The people in the middle of the income spectrum see themselves as the real backbone of the country, producing the wealth. And they have been persuaded that those at the bottom are the real problem, not the ones at the top. As a result they see those who promise to take actions to reduce income inequality and improve the conditions of the poor not as a good form of redistribution that reduces the vast inequality between the obscenely wealthy and the rest of us but as a bad form of redistribution that will take from the middle class and give to the undeserving poor.

This ties in with two other ideas. One is that people tend to resent the perceived inequalities that they can see around them more than the abstract ones they merely hear about. The fact that the people at the top have millions and billons of dollars and live the high life while they have little may bother them somewhat but those people live completely separate lives in their gated communities and you never run across them in your daily life. But the idea that the teacher next door ‘gets the summer off’ while they have to work year round makes them more resentful. The same with the government sector worker down the street who can look forward to a pension when she retires while you have only your meager social security.

In addition, the fear that someone currently lower on the socio-economic scale may, as a result of redistributive policies, rise above them makes them more alarmed than the idea of reducing the income of those at the top, which would not change their social standing in the least.

All these drive people to vote their fear, envy, and resentment rather than their hopes and dreams. Bernie Sanders is a candidate who has abandoned the neo-liberal, Republican-lite platform that Democrats have been using for years but it will take a while for his message to catch on and be adopted by other Democrats at all levels.

What was the Roman empire really like? » « Anton Karas and the theme from The Third Man