The second Democratic debate yesterday, this time involving only Bernie Sanders, Hillary Clinton, and Martin O’Malley, was once again spirited and substantive. Given that it occurred in the immediate aftermath of the horrendous events in Paris, it was not surprising that the first quarter or so was devoted to the whole issue of ISIS and terrorism. To their credit, none of the candidates used the occasion to indulge in excessive saber rattling or xenophobia against Muslims or call for the shutting down of moves to take in refugees fleeing the chaos in the Middle East. One can only shudder at what the Republican candidates would have said if it had been their debate last night. We would have seen a competition to see who could take the most extreme anti-Muslim position and they would have tied it to anti-Mexican immigrant bashing. 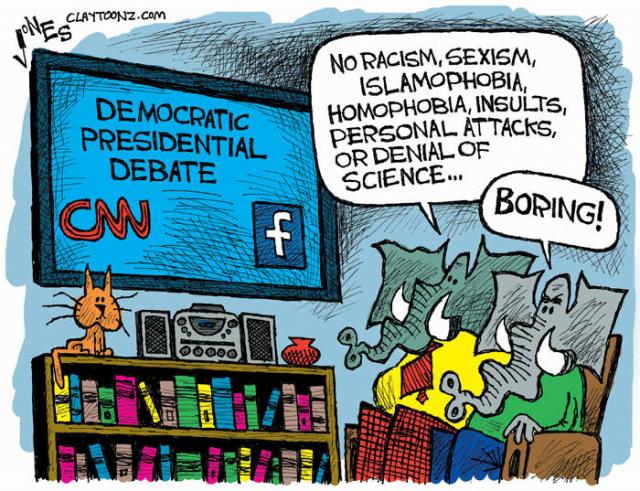 Instead we saw the three candidates reiterate the need to treat the refugees humanely and to treat the problem more thoughtfully in conjunction with other Muslims nations. As Sanders said, there is a battle going on for the soul of Islam within the Muslim-majority world, and we have to work together with other Muslim nations who are just as concerned about where this is going. Sanders also made the important point that the roots of ISIS can be traced back to the disastrous decision by George W. Bush to invade Iraq (backed by Clinton) and that the Bush-Obama policy of regime change in Libya and elsewhere in the region (also backed by Clinton) had created a wide swathe of instability and that groups like ISIS thrive in such failed states.

When the subject turned to economics, Sanders hit Clinton on her close ties to Wall Street and her willingness to accept money from those sources. He implied that her claim that these contributions would not affect her was disingenuous since these people do not write big checks with the expectation of nothing in return. O’Malley also piled on and said that the Robert Rubin and Lawrence Summers crowd (who are long-time close Clinton advisors and deep in the pockets of the Goldman Sachs and other big banks) would not be part of his cabinet. In what shocked me, Clinton in her defense seemed to invoke 9/11, the fact that Wall Street was close to the site of the explosions, as somehow a reason not to be too hard on them. She was immediately called out on this by a tweet from University of Iowa professor of law who said, “I have never seen a candidate invoke 9/11 to justify millions of Wall Street donations. Until now.” The moderators picked it up and she was asked to respond and pretty much did not dispel the impression that she had first made. Sanders said that “The business model of Wall Street is greed and fraud” and both he and O’Malley said that Wall Street executives would not be in their cabinets, a stand that Clinton did not echo. Sanders and O’Malley also demanded the breakup of the big banks and the re-instating of Glass-Steagall while she waffled.

Sanders and O’Malley also favored a $15/hour minimum wage while Clinton was only willing to go to $12.

Bernie Sanders got hit again for his vote against the Brady bill and on gun control generally. O’Malley was strong on this issue and pointed out that Clinton, although she speaks strongly now, has waffled all over the place in the past. This is not a surprise since the principle-poor Clintons are notorious for shifting their stances for political advantage.

The Guardian had a good summary of the night.

There were many issues that received scant or no attention, climate change, race and gender issues, Israel-Palestine, the Trans-Pacific Partnership deal and trade pacts generally, and criminal justice reform to name a few.

If anyone gained from this debate it was likely O’Malley, mainly because he got time to make himself and his positions better known. His line calling Donald Trump an “immigrant-bashing carnival barker” got a big laugh and is going to get a lot of media play and cause Trump to go after him, which has to be a good thing. If for whatever reason Clinton’s campaign craters, I can see the Democratic party establishment coalescing around O’Malley rather than Sanders.

I thought that the moderators did well and did not act as if the event was all about them. The questions were sharp and focused and they managed to keep things on track without being too officious.

You know what might make the debates better? No live audience. There is no doubt that their presence makes things more lively but the partisans in the audience are primed to cheer their candidate and disparage the others and this can sway viewers as to the merits of what the candidates are actually saying.