As religious beliefs come under siege from science and reason, and believers increasingly realize that they have no effective counter to these critiques that are resulting in nonbelievers becoming the fastest growing group in the world, there will be increasing attempts to stifle any speech that criticizes religion. These will come under different guises such as ‘promoting civility’ or ‘respect for religion’ or even ‘opposing hate speech’ but the goals are always the same: to stop people pointing out the deficiencies and evils of religion using reasoned arguments or (oh, the horror!) humor.

Religious people know that humor is a devastating weapon against irrationality and stupidity. Muslims have been the leaders in this effort to suppress such criticisms worldwide but other religions are not that far behind. In fact, make fun of the majority religion in any country and you risk trouble. But despite each religion thinking that other religions are not merely wrong but that their followers will go to hell, and despite brutal killings done against followers of other religions in the name of their gods, they are united against their common enemy – humor.

Maryam Namazie has been highlighting the attempts to suppress free speech by religions, especially in the UK, and has brought to my attention that February 11 has been declared A Day to Defend Free Expression.

The organization One Law for All is organizing a rally in central London on that day from 2-4 pm in defense of free expression and the right to criticize religion.

Please support it in any way that you can. 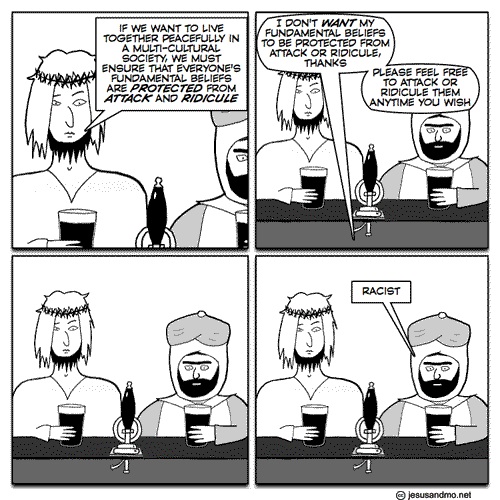 Watching The Daily Show and The Colbert Report clips in other countries » « Film review: The Ides of March (no spoilers)