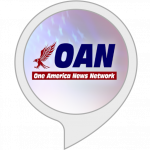 If you thought Fox News was bad, don’t turn on OAN. I haven’t. I don’t even know if our cable company includes it in their basic service, although it wouldn’t surprise me if they did, given the local clientele. But meanwhile, they’re just spewing ignorance to an amazing degree

In October, OAN used Indigenous Peoples Day to praise Christopher Columbus and Europeans for “civilizing” the “savages.” And throughout the nine-month period, OAN figures regurgitated right-wing talking points about “social justice warriors” forcing sports teams to change their names from racist slurs and “erasing” Columbus from our calendars.

Meanwhile, a Reuters investigation revealed that telecom giant AT&T had played a key role in creating and funding the far-right network, with 90% of OAN’s revenue reportedly coming from its AT&T contract.

They’re giving voice to some astoundingly stupid Italian-Americans, too.

Indigenous people "already got august 9, the day after Thanksgiving, and the whole month of November," yet the left now wants to give them Columbus day? The only day for Italianx Americans? Not on OAN's watch pic.twitter.com/V8yE5EHTpB

I have a suggestion for Mr Dimino of the Italian American One Voice Coalition: find better heroes to champion. It’s not as if there is a shortage. Ever hear of the Italian Renaissance? If you need a stronger connection to America, how about Fermi, or Marconi, or DiMaggio? You don’t need to attach your identity to a genocidal looter and all-around evil guy, just because he was Italian.

Led by Tipping Point host Kara McKinney, OAN treated the discovery of more than a thousand Indigenous children’s graves as a lie meant to target churches, drawing a tenuous connection between the discoveries and a string of church vandalism and arson across Canada.

Hmm. I wonder what OAN makes of this apology by Benedictine nuns?

We acknowledge the injustice done through our community’s participation in the federal government Assimilation Policy to educate Native American youth at Saint Benedicts’ Mission boarding school on the White Earth Reservation (1878-1945), St. Mary’s Mission on the Red Lake Reservation (1888-1940s) and the Industrial Boarding School (1884-1896) on our monastery campus.

Within the past two years the Sisters of the Order of Saint Benedict have been working in collaboration with the White Earth community, its Tribal Historic Preservation Office and the College of Saint Benedict to strengthen the bonds that continue to move toward reconciliation and peace with our Native American sisters and brothers.

It’s far too little, far too late, but if the Catholic Church can acknowledge the great wrongs done, does that mean that OAN is even more evil than Catholic pillagers and desecrators of Native American culture?

What kind of person would attack a child? » « Enlightenment is a relative thing