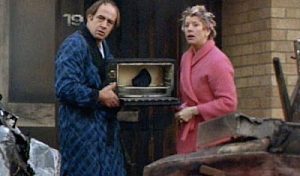 Kirkegaard, if you never heard of him, is a pretentious Danish pseudoscientist whose main claim to fame is that he’s a loud “race realist”, that he has defended child pornography, and has made the suggestion that we could make pedophiles happy and children safe from psychological harm if we…

Hang on. This is truly repulsive and vile. You can stop now if you want.

…his suggestion was that if we anesthetized children before they were raped, they wouldn’t know what happened, so no harm done. The fact that he doesn’t believe in global climate change and thinks feminism is bad (warning! That page is also cursed, because it documents all the horrible things he does believe) suddenly seem like relatively minor flaws in his character. Really, he is concentrated ugliness and evil.

But I don’t want to talk about that. In fact, I’d like to have my brain wiped right now, please.

Here’s the latest thing that caught my attention. He’s also litigious, and has tried to sue people for pointing out the vile things he has said, and I’m a little sensitive about people who go through that horrible process of being sued by narcissistic assholes. This story has a happy ending, at least.

I'm the individual he unsuccessfully sued for libel over his distasteful comments on child pornography. He recently lost the provisional assessment of costs. Outcome of libel suit here: https://t.co/QlnploN5vR
Of course, he never mentions he lost or his dire legal situation.

Oh, I am jealous. The courts actually warned Kirkegaard that if he continued with his frivolous lawsuit, which he had no chance of winning, they could rule that his actions were malicious and impose serious financial penalties. I wish our courts had said something like that to Richard Carrier, and that there had been a ruling that he had to pay our court costs. Kirkegaard, like Carrier, finally dropped his lawsuit.

The hearing for summary judgment was scheduled to take place on June 2 2020 but was cancelled because Kirkegaard discontinued. I would have almost certainly won if it had gone ahead. The Claimant eventually admitted he had no evidence against my opinions being honest so my legal defence of honest opinion was successful; my comments would also likely fail to meet the “serious harm” requirement for libel (Defamation Act 2013, section 1) since the preliminary judgment ruled against the Claimant’s pleaded (severe) meanings and accepted mine (less severe). With the lawsuit over there is only the bill of costs and detailed assessment left (it is doubtful there will be a default costs certificate). Having filed a notice of discontinuance, Kirkegaard is the losing party and became liable to pay my costs spent after the preliminary judgment to (cancelled) summary judgment hearing. Up to May 15 2020 – my costs were (approximately) £13,000 but these sharply increased to over £22,000, by the date Kirkegaard actually discontinued (May 21 2020).

In the spirit of compromise, on May 11 2020, I offered Kirkegaard a “deal” so he didn’t have to pay me £13,000, but only £9,000, as long as he discontinued on/before May 15 2020 plus remove a stolen copyrighted photo of me from his blog (with the defamatory caption “pedophile”) and a few other conditions. Kirkegaard declined this offer and has uploaded the same photo on more websites; in fact, he has been doing this for years and it was this malicious action what prompted me in the first place to write the comments he sued me for, so he only has himself to blame for his current predicament. I will file a DMCA report against Kirkegaard’s blog for infringement next year. My priority now is the bill of costs (I’ve recently hired a costs draftsman), which I expect sometime in July. Kirkegaard already owes me £6,722 for a (revised) costs order (dated March 10 2020). He is still in contempt of court for non-payment as well as non-compliance of this order – this will surely not look good for him in the detailed assessment whenever this occurs.

Court costs of £22,000? I am now doubly jealous, because our costs were an order of magnitude higher, and we didn’t get a judgment that required the plaintiff to pay up…even if, in this case, the plaintiff is a deadbeat who hasn’t even tried to pay it off.

My congratulations to Oliver D. Smith, and my sympathy for the unpleasant experience.

Nothing changes » « Welcome to the apostolic cult